Rock climbing walls, swimming pools, mini golf courses, ice skating rinks are now available on passenger ships. How do they do it? Who comes up with the next new thing? What role does innovation play in the development of the next generation of passenger ships? This "Innovation in Transportation" book, Passenger Ships, takes a look at the people and creative ideas that have changed the way we think about passenger ships.

Who was the first man to walk on the moon? Who developed the space shuttle? Will man ever land on mars? Find the answers to these questions and more when you take a look at space travel from a new perspective.

Where is the fastest train in the world? How is it possible for a train to go under the English Channel? What does the next generations of trains look like? Find the answers to these questions and more when you take a look at trains from a new perspective.

Who can up with the idea behind the first truck? How big is the largest truck in the world? How much does it haul? The "Innovation in Transportation" book Trucks takes a look at the people and creative ideas that have changed the way we think about trucks.

The new Boeing Superliner looks much different than the plane the Wright Brothers flew at Kitty Hawk. Have you ever wondered how new planes are developed? This "Innovation in Transportation" book, Airplanes, takes a look at the people and creative ideas that have changed the way we think about flying.

We hear a lot about the new global economy. How does it work? How are we able to transport so many products around the world? How have innovations in the development of cargo ships fueled the global economy? Find the answers to these questions and more when you take a look at cargo ships from a new perspective.

Your new family car looks very different than the Model T developed by Henry Ford. Cars of today are much faster, safer, and more reliable than the Model T. Have you ever wondered how new cars are developed? The Innovation in Transportation series takes a look at the people and creative ideas that have changed the automotive industry.

Who was the first person to ride a motorcycle? How did they come up with idea? Who makes the fastest motorcycle? This "Innovation in Transportation" book, Motorcycles, takes a look at the people and creative ideas that have changed the way we think about motorcycles.

Complete a variety of fun science experiments dealing with cars.

The Science of a Plane Crash

This book discusses the science behind plane crashes. The chapters examine the worst plane crashes in history, explain how aircraft fail, and show how scientists and engineers are designing safer aircraft. Diagrams, charts, and photos provide opportunities to evaluate and understand the scientific concepts involved.

This title discusses how tunnels are built, from planning and excavation to construction to site design.

This title discusses how airports are built, from runway design and construction to terminal and security.

This title discusses how bridges are built, including engineering, design and construction. 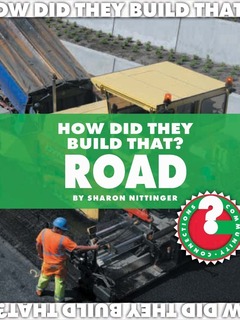 This title discusses how roads are built, from road design and construction to painting and lighting.

Fire trucks help to save lives and prevent the spread of dangerous fires every day. Readers will learn where a fire truck gets its water supply, what kind of equipment it contains, and the ways firefighters use these tools to help keep people safe.

Tractors are an essential tool for farmers everywhere. Readers will learn how farmers use tractors to plant and harvest the crops we use every day. They will also find out how people use tractors to maintain their yards and do chores.

What Does It Do? Ambulance

Ambulances can help save lives when people are sick or injured. Readers will learn about the different kinds of lifesaving equipment found on an ambulance. They will also learn about the paramedics and EMTs that staff these important vehicles.

From bridges and streets to houses and skyscrapers, cement is an important material used in many of the structures we use every day. Readers will find out how cement mixers are used to blend, transport, and spread cement wherever it is needed.

Tall cranes tower above construction sites and line the edges of shipping ports. Readers will find out how different types of cranes are used to help build skyscrapers, load cargo ships, and much more.

Almost anything we build requires some sort of digging. Buildings, tunnels, and swimming pools all start with holes in the ground. Readers will find out how different kinds of diggers are used to create these holes. They will also learn about how diggers are used to help scientists learn more about the Earth.

A is for Airplane: An Aviation Alphabet

Did you know that helicopters can fly forward, backward, and side-to-side? Or that the wingspan of a jumbo jet is almost twice as long as the distance of the Wright Brothers' first flight? Since recorded time, man has looked to the sky and dreamed of ways to fly there. A is for Airplane: An Aviation Alphabet celebrates the roots, inventions, and spirit of the science of flight. Young readers will learn about famous events such as the Spirit of St. Louis's nonstop flight across the Atlantic Ocean and the launch of Columbia STS-1 (the first space shuttle), as well as meet courageous aviators who broke barriers in the air and on Earth like the Tuskegee Airmen and Amelia Earhart. Aircraft of all kinds, including giant airships, wind-dependent gliders, and awe-inspiring F-16s, are depicted in spectacular artwork. The glory of flight is brought to stunning life.

Originally built in 1921 to race in the ocean, a sailboat named Bernida captures the attention and heart of a Michigan sailor. He buys the boat and brings her to the Bayview Yacht Club in Detroit. In 1925 the sailor enters Bernida in the very first Port Huron to Mackinac Island Race. 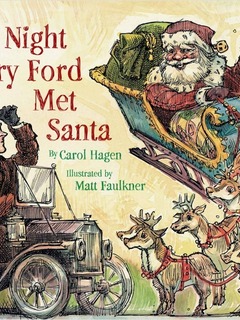 Could Henry Ford have taken his idea for an automobile assembly line from the elves at the North Pole? Maybe so. Set just before Christmas in 1908, this charming tale finds Henry Ford puzzling over a way to make his Model T affordable for the average family. His little son Edsel suggests that Daddy write to Santa for advice. Since Santa makes toys for millions of children, Edsel points out, he must know a better way. Henry writes the letter just to please his son, but Santa actually answers by taking Henry to visit his North Pole workshop. When he sees the elves working in a line, each completing just one specific task on every toy that's made, Henry Ford envisions an automobile assembly line. The story not only illustrates that children can teach adults how to dream, but it also provides an author's note with factual information about Henry Ford and the Model T.

What Should I Do? In the Car

The potential dangers of riding in automobiles are presented, and readers are taught about seatbelt safety and how to avoid distracting a driver.

How Does It Fly? Blimp

Blimps were once a popular form of transportation. Find out how they work and why they are not so common anymore.