Build a fiber-optic tube to carry light like engineer William Wheeler did, or use the sun to imprint images on objects like pottery-maker Thomas Wedgewood. This title gives readers both an understanding of the properties of light and the skills to investigate great discoveries and works. Exciting and easy-to-understand experiments encourage budding scientists, inventors, engineers, and artists to stand on the shoulders of the curious and creative people who came before them.

Build a vending machine like ancient Greek engineer Hero of Alexandria did, or a tentacle prosthetic arm like industrial design student Kaylene Kau. This title gives readers both an understanding of mechanics and the skills to investigate great discoveries and works. Exciting and easy-to-understand experiments encourage budding scientists, inventors, engineers, and artists to stand on the shoulders of the curious and creative people who came before them.

Forensic Investigations of the Ancient Chinese

What can modern forensic tools teach us about existing and newly uncovered artifacts from ancient Chinese dynasties? How can we learn about human migration from the discovery of preserved bodies? Can today’s technology uncover new clues about the Great Wall of China? Dive into this intriguing title, which examines how forensic science has allowed scientists, archaeologists, and historians to solve mysteries and answer questions about ancient China.

Forensic Investigations of the Ancient Greeks

How can modern DNA analysis of ancient tombs help us learn more about life in ancient Greece? Can ground-penetrating radar reveal hidden city structures? What can we learn from 3D recreations of ancient Greek structures, artifacts, and art? This fascinating title will satisfy curious readers as it examines how forensic science has allowed scientists, archaeologists, and historians to solve mysteries and answer questions about ancient Greece.

Forensic Investigations of the Ancient Egyptians

Can modern forensic tools help us uncover new clues about who built the Great Pyramid at Giza? What can mummy forensics teach us about the mummified remains of Egyptian royals? How does the forensic analysis of Egyptian coffins help identify an unknown cause of death? Curious readers will love this interesting title, which examines how forensic science has allowed scientists, archaeologists, and historians to solve mysteries and answer questions about ancient Egypt.

Forensic Investigations of the Aztecs

How can modern forensic tools help solve the mystery of ancient Aztec skull masks? What can we learn about Aztec life from the forensic analysis of their art? Can chemical analysis teach us about how Aztecs treated disease—and why millions were killed in an epidemic? This exciting title offers answers to these questions and more as it examines how forensic science has allowed scientists, archaeologists, and historians to solve mysteries and answer questions about the Aztecs.

Forensic Investigations of the Romans

Can modern DNA analysis uncover clues about the ancestry and migration of Romans? What new information can forensic science teach us about the fate of the citizens of Pompeii? How can X-rays help us analyze ancient art to learn about ancient Roman life? Find answers to these questions and more in this captivating title, which examines how forensic science has allowed scientists, archaeologists, and historians to solve mysteries and answer questions about ancient Rome.

Forensic Investigations of the Maya

What can modern DNA analysis of skeletons tell us about the lifestyle, diet, and beliefs of the Maya? How can new mapping technology uncover previously hidden Mayan cities and structures? Can we use forensic science to solve the mystery of how the Mayan civilization came to an end? Get lost in this compelling title, which examines how forensic science has allowed scientists, archaeologists, and historians to solve mysteries and answer questions about the Maya. 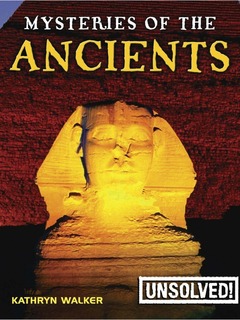 Archaeologists are like detectives. They find objects from the past and treat them as clues to understanding what life was like long ago. This title aims to create meaningful connections between the scientific concepts readers learn in the classroom and how they are applied in the real world by archaeologists searching for answers.

This gripping title traces the causes, symptoms, and treatment of plague through the height of the Black Death in Europe and into the modern day.

This captivating title examines the eruption of Mt. Vesuvius that destroyed Pompeii in 79 A.D. and what the remnants of this buried city can teach us today.

The robots of today do more than just heavy lifting. Machines that can sense the world and make decisions are now being used in space, industry, medicine, and the military. This adventurous book follows the development of robots over the past century and describes how modern robots continue to revolutionize different fields making our lives easier, healthier, safer and more exciting.

One hundred years after its tragic voyage, the Titanic continues to capture our imaginations. This fascinating title looks at the building, voyage, sinking, and rediscovery of the Titanic.

On January 24, 1848 a man named James W. Marshall found gold at Sutter's Mill in Coloma, California. This compelling title explains how Marshalls discovery sparked gold fever and lured thousands of people west in search of great fortunes. Primary source accounts and historical photographs trace the history of the gold rush in California as well as the later Klondike gold rush.

Expedition to the Arctic

For centuries, exploration of the Arctic has been pursued for its potential value as a commercial sea route. Many expeditions tried in vain to navigate its frozen waterways. This timely book tells the stories of famous expeditions to find a Northwest Passage from the Atlantic to the Pacific, to map the frozen wasteland, and to be the first to reach the North Pole.