Learn all about ankylosaurus through diagrams, graphs, powerful illustrations, and fun text.

Learn all about apatosaurus through diagrams, graphs, powerful illustrations, and fun text.

Learn all about iguanodon through diagrams, graphs, powerful illustrations, and fun text.

Learn all about pterodactyl through diagrams, graphs, powerful illustrations, and fun text.

Learn all about stegosaurus through diagrams, graphs, powerful illustrations, and fun text.

Learn all about triceratops through diagrams, graphs, powerful illustrations, and fun text.

Learn all about tyrannosaurus rex through diagrams, graphs, powerful illustrations, and fun text.

Learn all about velociraptor through diagrams, graphs, powerful illustrations, and fun text.

Do you like to collect things? Many people do. Some people collect art. Others collect objects from history. Some people collect cars or toys. You can collect just about anything! There are almost as many museums as there are things to collect. Take a trip back in time and learn more about these amazing places.

When you hear the word "playground," what do you think of? Do you picture slides and swings? Do you think of climbing walls and tunnels? Or do you picture pirate ships and space to run? Over the years, playgrounds have changed in many ways. But they have always been a place where children can enjoy themselves and learn important lessons about safety and getting along with others. Discover how playgrounds came to be and how they have changed over the years.

Today's amusement parks are filled with amazing, high-tech rides. Some even take the fun to the water! Amusement parks of the past were exciting places as well. Amusement parks have been around for hundreds of years. Readers discover the history of these fun-filled places!

No Bones About It

Millions of years ago there was a dinosaur on Earth called Brachiosaurus. One Brachiosaurus weighed as much as 17 elephants! Can you imagine how big some dinosaurs must have been? In this book, readers explore a world where dinosaurs roam. And learn fascinating facts about dinos along the way.

The parasaurolophus was a duck-billed dinosaur famous for its long crest. Scientists believe the crest made a sound like a horn! This high-interest text explores the fascinating parasaurolophus, focusing on its appearance, diet, and behavior. Leveled text highlights key points, while labeled illustrations bring them to life. Added features such as maps, a pronunciation guide, a diet graphic, and a two-page profile further highlight the world of the parasaurolophus!

The oviraptor was a small but fierce dinosaur. It used its sharp claws to find food and fight off predators! Readers of this high-interest text will discover what made the oviraptor unique, from its tall crest and toothless beak to its favorite meals. Along the way, labeled illustrations highlight key points of the text, and special features such as maps, a pronunciation guide, a diet graphic, and a two-page profile show off even more fascinating facts about this ferocious dinosaur!

The apatosaurus grew up to 75 feet long! These enormous dinosaurs stomped the earth 160 million years ago, but paleontologists still study them today! This high-interest text for young readers explores what the apatosaurus looked like, what it ate, where its fossils have been found, and much more. Leveled text and vibrant illustrations combine with maps, a pronunciation guide, a diet graphic, and a two-page profile to take readers on a journey into the world this giant sauropod! 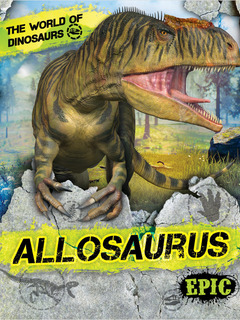 Here comes an allosaurus! The fierce predator races toward its prey. It sinks its sharp teeth into its latest meal! Scenes like this one were common during the Jurassic Period, when the allosaurus walked the earth. In this high-interest text, readers will explore the world of the allosaurus, from how it hunted to where it lived to why it went extinct. Special features include maps, a pronunciation guide, a diet graphic, and a two-page profile that highlights key information about the allosaurus. Readers will love taking a bite out of this ferocious title!

Offers readers a captivating look into space missions, complete with vivid photographs and exciting diagrams. Back matter includes an in-depth 'Out of This World' feature that highlights a related topic, a phonetic glossary, resources for further study, and an index.

Highlights fascinating facts about space, from the hottest planet in the solar system to volcanoes that spew icy slush. Learn about the planet that spins on its side, the only animal that can survive in space without a spacesuit, an asteroid so big that scientists mistook it for a planet, and more! Additional features include a table of contents, a phonetic glossary, an index, and sources for further research.

Highlights fascinating facts about natural disasters, from rumbling earthquakes to spinning hurricanes. Learn about the Alaskan earthquake that sunk boats in Louisiana, the volcanic eruption that blocked sunlight for months, the hurricane that blew Pacific seabirds all the way to Arizona, and more! Additional features include a table of contents, a phonetic glossary, an index, and sources for further research.

Highlights fascinating facts about math, from the invention of zero to numbers too large to write out. Learn about the ancient Egyptian god that represents one million, the magic of the number 9, the infinite digits of pi, and more! Additional features include a table of contents, a phonetic glossary, an index, and sources for further research.

Highlights fascinating facts about inventions, from the first usage of glue tens of thousands of years ago to 3-D printers used in space. Learn about a forgotten drink turned into a beloved summer treat, the first words ever recorded, a remote controlled boat from the 1800s, and more! Additional features include a table of contents, a phonetic glossary, an index, and sources for further research.

Highlights fascinating facts about history, from quirky world leaders to weird fashion trends. Learn about the French king who thought he was made of glass, the Serbian soldier who disguised herself as a man to fight in the army, the medieval barbers who performed surgery, and more! Additional features include a table of contents, a phonetic glossary, an index, and sources for further research.

Highlights fascinating facts about engineering, from ancient pyramids to space-age telescopes. Learn about the flooded colosseum, a dam large enough to slow Earth's rotation, computers smaller than a grain of rice, and more! Additional features include a table of contents, a phonetic glossary, an index, and sources for further research.

Highlights fascinating facts about dinosaurs, from their first appearance on Earth to their extinction 65 million years ago. Learn about a dinosaur nicknamed after a rock star, a battle between two dinosaurs that are forever captured in a series of fossils, the dinosaurs as long as a jumbo jet wing, and more! Additional features include a table of contents, a phonetic glossary, an index, and sources for further research.

Computers from Then to Now

Computer technology is brought to life with photo-driven design, clear text, and an integrated timeline, making this an excellent resource on the history of computing for elementary students. Back in the 1950s, computers were only for employees of the government and universities. They were way too expensive for the average person. In 1975, the Altair 8800 kit made them affordable. It also inspired a guy named Steve Wozniak to start Apple Computers with his friend Steve Jobs. Then came mice, GUIs, MacIntosh versus PC, and the World Wide Web. In the 2000s, computers got into cell phones and now everyone carries a computer in their pocket. Where will artificial intelligence take computers in the future?