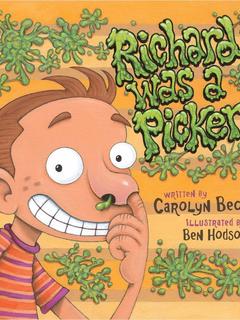 Richard Was a Picker

Richard picks his nose, until one day he discovers the perils of his habit. When his finger gets stuck up his nose, Richard panics. Then his nose sucks up his arm. Before he knows it, all of him slides up his nose. Richard has become a giant booger. He propels his booger-ball self out of his house. But as he rolls down the sidewalk things get worse, way worse. Soon the whole town is chasing after him and jabbing at him. Will Richard be poked to pieces? With some quick thinking and a little luck, Richard avoids a terrible end.