Fresh from his adventures in Wild Ride, Marcus is back and helping his cousin, Bounce, learn to skate. Between learning how to ollie and do a 50-50 grind, Bounce and his friends also have to avoid the skate-park goons and take on the outlaw bikers who are terrorizing the small town. Excitement, action and some radical skating tips. Hang on for another wild ride! 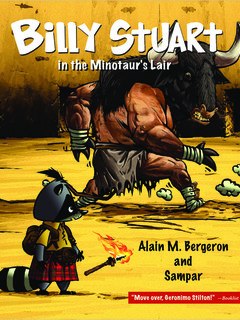 Billy Stuart in the Minotaur's Lair

Billy Stuart, the young raccoon leader of the Zintrepids Scout troop, aspires to be just like his grandfather, a globe-trotting adventurer who knows no fear. After accidentally traveling through time in pursuit of Grandpa, Billy and friends find themselves on the island of Crete, snout to snout with King Minos's Minotaur. It's a formidable challenge; Billy and his buddies have to escape the Minotaur, the labyrinth and King Minos's wrath and maybe, just maybe, find their way home! Brightly illustrated and enhanced with games and puzzles, this sequel to Billy Stuart and the Zintrepids is sure to amuse readers of all ages.

Pema, Bounce and Jagroop are battling a greedy developer for control of the airwaves. When Karl Reed, Owner of Oasis Developments, tries to force the sale of a local fruit farm ”through whatever means necessary” Pema, Bounce and Jagroop decide to expose him through the media. Little do they realize that when it comes to the news and the advertisers who make it possible, the truth is not always part of the story and nothing can be taken at face value. While learning about media consolidation and the power of money over truth, Bounce, Pema and Jagroop decide to take on the developers and the media.

While Devin and Nadia spend summer vacation at a university camp for little kids—Nadia as a counselor and Devin as an unwilling participant—their mother's research project is vandalized and her motives are questioned. Devin, Nadia and Simon stumble upon shady characters, corporate conspiracy and a plot to take over the nation's food supply with genetically modified fertilizer. Mixing action and suspense with information on the agricultural system and the intricacies of the food supply, Food Fight is another gripping installment in the Graphic Guide Adventure series.

Devin and Nadia team up with Bounce, Pema and Marcus as they all travel to Northern Ontario to watch their parents present to the Summit of World Leaders. A swarm of politicians, lobbyists, corporate bosses and protestors have all converged on the summit to get their messages heard. A tragic accident just hours before their parents' presentation plunges the kids into their biggest mystery yet and sets them on the trail of a murderer bent on stopping their parents' controversial message from being heard. It's a fight against the planet's power players as the kids dive into the world of politics, uncovering how government works, the history of democracy, the influence of lobbyists and corporations on politicians and the potential of civil society to change it all.