Connected Lives, a contemporary nonfiction series for teens, features the fascinating life stories of popular artists. Each book presents two singers in a similar musical genre who have lived extraordinary lives, exploring how their lives interconnect and how they are different. As similar as these artists may seem, their rise to fame may have been very different. Multiple musical genres are represented across the series, including pop, hip-hop, jazz, and country. Graphic elements, such as timelines, charts, and Venn diagrams, are featured in every chapter.

Connected Lives, a contemporary nonfiction series for teens, features the fascinating life stories of popular artists. Each book presents two singers in a similar musical genre who have lived extraordinary lives, exploring how their lives interconnect and how they are different. As similar as these artists may seem, their rise to fame may have been very different. Multiple musical genres are represented across the series, including pop, hip-hop, jazz, and country. Graphic elements, such as timelines, charts, and Venn diagrams, are featured in every chapter.

Seeds can also be used to make art, jewelry, and more! This fun title introduces eight seed-based crafts sure to inspire young readers who crave hands-on activities. Informative openers introduce and step-by-step instructions guide readers through each craft. Additional features such as supply lists, craft tips, and nature safety rules ensure that readers have fun and stay safe outside!

How do you make a stick sailboat that really floats? Or a stick birdhouse that birds really use? This book for young readers includes eight stick- and twig-based crafts that answer those questions and more. Fact-filled openers introduce step-by-step instructions for each craft. Special features including supply lists, craft, tips, and nature safety rules add even more guidance.

Each type of tree has unique leaves with a beauty all their own. Why not show them off? This engaging title introduces eight leaf-based crafts for kids, ranging from a short and sweet leaf hedgehog to an intricate leaf wall hanging. Informative text introduces each step-by-step craft, and features such as supply lists, craft tips, and nature safety rules offer additional information.

How do you create a crown with nothing but flowers? This book for children has the answer! Containing a flower crown and seven other flower-based projects, this title invites readers to get hands-on with nature. Alongside the step-by-step instructions are fact-filled introductions related to each craft. Supply lists, craft tips, and nature safety rules make this text even easier to follow!

Some of Hollywood’s biggest blockbusters are animated movies! From hand-drawn animation to computer-generated works, animation is a fascinating world of fantasy. But what goes into making these popular films? This high-interest title answers that question! Special features highlight famous animated works, and profiles of famous animators such as Walt Disney and Hayao Miyazaki introduce readers to animation pioneers. For readers interested in behind-the-scenes movie magic, this title is sure to deliver!

Many are familiar with Andy Serkis’s groundbreaking motion capture role as Gollum in the Lord of the Rings film series. But motion capture has come a long way since it first began! This title introduces the technology behind motion capture, using many of today’s most popular movies as examples. Special features highlight famous uses of motion capture, and pioneer profiles introduce some of the most influential mocap filmmakers in history. This high-interest title is sure to capture the attention of readers!

Get ready for a wild ride! From boats and planes to sports cars, vehicles have been used in movies since the dawn of film. Through gripping text and vibrant photos, this title explores some of the most famous on-screen vehicles in movie history. Special features introduce readers to movie pioneers, unique vehicles, and more. Whether you want to hit top speed in one of James Bond’s cruisers or learn how Herbie the Love Bug was chosen, this engaging book will take you along for the ride!

Special effects have come a long way over the past century! Computer-generated visual effects are now par for the course, bringing spectacular worlds to screens big and small. This title explores the history of visual effects, starting with the very first uses of CGI in the 1970s to the present day, where just about anything is possible! This title includes engaging text and vibrant photos that are sure to grip young readers. Additional special features highlight early visual effects, introduce pioneers in the field, and show off some of the best uses in modern movies!

Movies and music have come a long way thanks to technology, from watching movies on the big screen at a theater and listening to big vinyl records on a bulky record player to streaming hundreds of movies and music wirelessly with just a click of a button. In Movies and Music in the Disruptors in Tech series, readers will discover how technology has and continues to disrupt the movie and music industries. Series includes a table of contents, tech-forward sidebars, a timeline, glossary, index, and author biography.

Who were history's most creative artists? Who was voted "Best Visionary?" In the History's Yearbook series, readers will learn about the amazing and diverse women in history. In Girl Artists, readers will discover and rediscover their favorite heroines and learn about top women artists who have made an impact. Each book in this series is written at a higher maturity level using considerate text at a lower reading level in order to engage struggling readers. Backmatter material includes writing prompts that encourage readers to think creatively and critically. Series includes, a table of contents, educational sidebars, bibliography, glossary, index, and author biography.

Everyone knows his story, but do you know the REAL history behind the story of Wolfgang Amadeus Mozart? History has never been so juicy! Written with a high interest level to appeal to a more mature audience and a lower level of complexity with clear visuals to help struggling readers along. Considerate text includes tons of wild facts that will hold the readers' interest, allowing for successful mastery and comprehension. A table of contents, timeline, glossary with simplified pronunciations, and index all enhance comprehension.

Sight and Sound in Minecraft: Art

Using the fun, interactive world of Minecraft and key concepts in STEAM, two teachers developed the Minecraft and STEAM series to be used in and out of the classroom. In Minecraft and STEAM, students discover that Minecraft isn't just a game, it's a tool that can be used to learn about real-world science, technology, engineering, art, and math. Sight and Sound in Minecraft: Art focuses on art but includes other STEAM concepts in the sidebars. Includes table of contents, glossary, index, sources for further reading, and an extension activity. 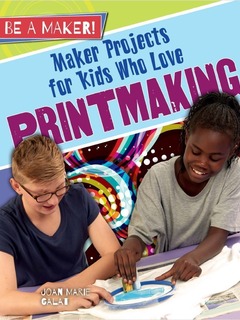 From creating their own art tools to making a screen print unique to their personal style and vision, this title helps readers express their creativity through the various forms of printmaking. Using clear methods, engaging photographs, and non-toxic materials, readers will learn the techniques of printmaking and be inspired to experiment with their own designs and ideas.

Politics and the Media

Using the new C3 Framework for Social Studies Standards, Politics and the Media in the Global Citizens: Modern Media series explores the topic through the lenses of History, Geography, Civics, and Economics. Text and photos look at the history, basic philosophies, and geography of politics and mass media. As they read, students will develop questions about the text, and use evidence from a variety of sources in order to form conclusions. Data-focused backmatter is included, as well as a bibliography, glossary, and index.

An examination of the art movement known as Late Modernism from its beginnings in the 1940s to its decline in the 1970s, including an introduction to great artists and works.

Learn what life is like for a professional dancer and find out if its the right career for you.

Smartphones put a camera in just about everyone’s pocket, but it hasn’t always been so easy to take a snapshot. The 18th century brought a new innovation that allowed people to easily preserve a moment in time. That innovation carries on today! Through informative text, fun facts, and special features, this fascinating title explores how the camera was invented and how it continues to develop!

Calvin Klein, a boy from the Bronx, took his first clothing line of three dresses and six coats to an appointment at Bonwit Teller, New York's department store for the wealthy. Before long, he had designed a line of jeans that sold 200,000 in a week, and he was called the "King of Clothes" by People magazine. Along the way, he became known throughout the world for the beauty of his elegantly uncluttered clothing. In partnership with childhood friend Bernie Schwartz, he built an empire around his ideas that came to include fragrances, cosmetics, underwear, and home decor. Today his clothes are recognized as classics, and his style represents the best in American design.