This book gives young readers some interesting food for thought! From eating local foods to packing litter-free lunches, readers will be empowered to reduce their personal food prints and make better, Earth-conscious choices about what they eat and drink.

Age-appropriate text and vibrant photographs describe environmentally conscious changes that can be made in the classroom and throughout the school. From tips to saving paper to environmentally-conscious crafts, this fact-filled book makes the grade!

This enlightening title introduces young readers to clean, green energy sources. Readers will learn how traditional energy sources are harmful to the environment. They will discover that energy can be generated from the Sun, wind, water, and other renewable sources. They will also pick up some practical energy-saving tips they can use in their everyday lives.

This informative title will inspire budding activists to go green in the garden! Accessible text and engaging photographs introduce composting and Earth-friendly gardening. Readers learn how to build a compost bin, what items to recycle in the bin, and how to use compost to start their own garden.

This empowering title inspires readers to make their homes the ultimate green scene! This motivating book explains the importance of practicing environmental stewardship at home. Readers will discover how simple changes, such as using natural cleaning supplies and unplugging video game consoles, can have a positive impact.

What Does it Mean to Go Green?

Going green is a commonly used term, but what does it really mean? In this overview book, fact-filled text and child-centered examples explain the threats that the Earth faces and encourage readers to be inspired activists for environmental change. Readers will be encouraged to live each day as though it is Earth Day!

Wild ones are moving into the city! Follow the dog Scooter as he wanders an urban landscape, seeing many wild animals and not seeing even more. Supplementary material contains true stories and helps children become aware of the presence of wild animals and understand why they have taken to living in cities.

The ABCs of Endangered Animals

Bobbie Kalman presents some of the most endangered animals on Earth: rhinos, bats, butterflies, penguins, gorillas, monk seals, komodo dragons, and tigers, to name just a few. This beautifully photographed volume also explains the various classifications of endangerment, as well as the major reasons why some animals are facing extinction.

Be the Change for the Environment

Caring for Earth is everyones job! Readers will discover some of the different ways they can have a positive impact on the environment. From planting trees and eating locally grown foods, to pre-cycling and protecting animal habitats, children will learn to take personal responsibility for environmental stewardship. Readers will discover how they can be effective problem-solvers when it comes to protecting the planet.

Be the Change in the World

In this innovative title, young readers learn what it means to be a citizen of the global community. From water wells in Africa to global disaster relief, children will learn about different needs around the world and discover their own abilities to make the world a better place.

For years Jasper, a moon bear, lived a miserable existence, held captive in a cage by bear farmers in rural China. The farmers extracted the bile from Jasper's body and sold it to be used in traditional medicines. It's a horrific practice and conducted on thousands of moon bears each year. But now Jasper has the chance to be free and live a life away from pain and torture. In 2000, Animals Asia, an animal welfare organization, rescued Jasper and other captive moon bears, taking them to its Moon Bear Rescue Centre. Here veterinarians attended to the bears' wounds, hoping to give them some chance of a peaceful existence in the animal sanctuary. But after so many years of abuse Jasper's wounds, both physical and mental, are extensive. Can Jasper mend his body and mind and finally enjoy the life he was meant to live?

Level 3 guided reader that helps educate young readers on the importance of recycling and what they can do to help protect the earth's resources.

Kids Can Use Less

Level 3 guided reader that helps kids understand the importance of consuming less and the impact that has on keeping the earth healthy.

Kids Can Clean up Trash

Level 3 guided reader that teaches kids the importance of cleaning up trash and the impact that has on keeping the earth clean. 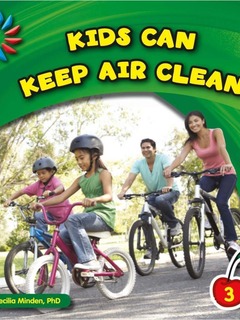 Level 3 guided reader that helps students understand the importance of keeping air clean and give idea's of things they can do help improve the environment.

Level 3 guided reader that helps teach students the importance of keeping water clean and gives practical ideas on things they can do to pitch in.

S is for Save the Planet: A How-To-Be Green Alphabet

Did you know Americans generate nearly 250 million tons of trash each year? Or that it takes hundreds of years for a polystyrene cup to decompose? Mankind's negative impact on Mother Earth is tremendous and daily bad news can make it feel overwhelming. But all is not lost! S is for Save the Planet: A How-to-Be-Green Alphabet details the many environmental issues we face and then suggests easy-to-take actions that anyone can do. From the particulars of vermicomposting and xeriscaping, to the three R's of responsible waste management, young readers learn how they can be a force of nature in protecting the earth for generations to come.Brad Herzog spends two months every summer traveling across the country with his wife and two young sons and celebrating America's natural wonders. Together, they have visited more than 30 national parks and seashores. This is Brad's eighth alphabet book for Sleeping Bear Press. He lives on California's Monterey Peninsula. Linda Holt Ayriss is the recipient of a silver medal from the Best in the West Society of Illustrators, and has been recognized in the Communication Arts Annual. She is also the author of Sleeping Bear's E is for Evergreen: A Washington Alphabet. Linda lives in Washington State.

Level 3 guided reader that helps educate young readers on the importance of reusing items and the role that plays in saving Earth's resources.

Readers will learn how animals are reintroduced into their natural-world setting that they might have never known.

You can celebrate the huge difference caring people make for endangered animals while you practice subtraction skills. In this sequel to her popular addition title, What's New at the Zoo?, Slade presents a new subtraction problem in each clever rhyming verse. The colorful watercolors include realistic animals set in lush spreads by illustrator, Joan Waites. So join in the celebration of our world's precious animals with this exciting title, and have fun practicing math skills along the way! The "For Creative Minds" educational section includes: Endangered Animal Vocabulary, Food Chains and Webs, Missing Links in Food Chains, Endangered Animals, and Fact Families.

Felina the Florida panther loved growing up in her forest home, until the forest starts to shrink! Trees begin to disappear, and Felina doesn't understand the new busy highway in the neighborhood. Other animals are in danger, too. Will Felina find a way to survive as humans threaten to ruin her home? Environmental science writer Loran Wlodarski gives children a look into deforestation and endangered animals in Felina's New Home: A Florida Panther Story, complemented by the detailed, emotive illustrations of Lew Clayton. Learn whether the animals in Felina's forest adapt to the new human presence and what children can do to keep wild animals safe, happy, and healthy.

Plant a tree and walk to workits Earth Day! An annual celebration of awareness, Earth Day is designed to encourage people to take part in the preservation of their environment. Come inside Earth Day to learn the history of the event, the celebrations, and how you can get involved. Young readers will enjoy this inviting look into the world of environmental consciousness.