From the Panama Canal to Hoover Dam and the Eiffel Tower, Experts in Engineering outlines the principles and processes followed to build some of the world's most spectacular structures. Readers will enjoy reading the stories behind each project as well as the mini bios of the "STEM-gineers" who worked on them. Experiments and research challenges help reinforce concepts.

Scientists have solved problems as varied as the germ theory of disease and the start of our universe. This amazing book outlines the great discoveries made and the principles followed by scientists who explore our world. Readers will enjoy reading the stories behind each historic discovery as well as the mini bios of the science "STEM-gineers" who made them. Experiments and research challenges help reinforce concepts.

Robotics, the Internet, and computers are some of the most signifcant technology breakthroughs of the last hundred years. This book identifies the pioneers of technology and how their innovations have revolutionized our world. Readers will enjoy reading the stories behind each historic invention as well as the mini bios of the technology "STEM-gineers" who made them. Experiments and research challenges help reinforce concepts. 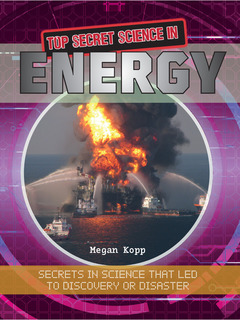 Spying and surveillance has always relied on cutting-edge science to push the boundaries. The same techniques are often used today by hackers to commit online data security breaches. This intriguing book will captivate readers who have an interest in spymaker gadgets, computer science, and biometric data for online identification and security.

Medical and pharmaceutical research is big business. This fascinating book reveals the competition in the corporate and academic worlds to be the first to find a new procedure or product that could change the world. Features include Dark Science Secrets, which reveal stories of unethical and deadly medical experiments from the past.

Ever wonder how fault lines, caves, and volcanoes were formed and how people came to live on or next to them? Earth’s Underground Structures uses cutaway illustrations to examine some of the world’s most interesting natural underground structures created by Earth's forces and processes.

What lies beneath your city or town? Underground City Systems uses cutaway illustrations to explore the world’s great sewer and water systems. Readers will be amazed by such startling facts as the “fatberg” causing problems in London, England’s sewer system, and toilet-swimming sewer rats that plague all sewage systems. Readers will also learn about other underground services and systems, including heating and cooling, power and cable, as well as underground farming.

A fun and fascinating look at subterranean city spaces, this book takes readers on a tour through vaults, tunnels, shopping malls, and pathways built throughout the world. Cutaway illustrations and maps help readers understand how cities were built from the underground up.

From ancient Pueblo homes to the Australian mining town where half the population lives underground, this appealing book uses cutaway illustrations to introduce readers to homes that were built below ground. Labeled diagrams of underground homes and fun facts will make this enjoyable read highly useful.

Oumuamua is a space rock that formed around another star. Of the 10,000 space objects that have hurled past our Sun, this rock provides some proof that there are planets similar to Earth outside our solar system. This intriguing book reveals to young space explorers the secrets contained in the rocks that fly around in space.

Building a Home in Space

This book takes a look at what a space home might look like and what it would take to live on Mars - the Red Planet (or any other place in space, for that matter). From the Mars ice home of the future to a make-your-own project, this book will enthrall and inspire readers and future engineers.

Unlocking the Secrets of the Solar System

How was the solar system created? Why are the Sun and Moon the same size in the sky? These are just some of the questions answered in this exciting book about our seemingly endless solar system. Readers will love the problem-solving focus that makes space exploration an adventure in innovation.

Our star is a dynamo of energy that we cannot live without. Readers will enjoy the detailed information about the Sun’s makeup and life phases. Special sidebars will draw young enthuiasts into making real-life decisions about harnessing the Sun’s power for our use now and for the future.

Dreams of Space: Before Apollo

The Space Race was an unofficial competition for spaceflight dominance between Cold War rivals the United States and the Soviet Union. This interesting title sets the scene for lunar and space exploration by both countries, describing early rocket development, NASA's Gemini program, which put humans in space, and the development of robot explorers. Maps show how early astronomers mapped the Moon hundreds of years ago, and what materials the Moon is made up of.

For years, space scientists have been asking the question “Is there other life out there?” Readers will enjoy the fascinating history of our search for extraterrestrial life - from aliens to tiny microbes - with technology such as telescopes, radio signals, and monitoring systems.

How soon can you board a rocketship to Mars? And how will you survive when you get there? There are so many challenges to overcome in sending a human into space, such as problems of distance, fuel, and propulsion. This compelling book describes the history and future of space travel and the exciting areas of research travel presents.

The online world is an environment full of opportunity - and risks. Social networks and online shopping sites encourage users to share personal information about themselves, but this can expose them to Identity spoofing and theft. Digital Data Security explores the many issues involved with cyber security, how companies combat hackers, and and how individuals must take charge of their own digital safety.

Learn how to work together with other gamers as a team or as a strategy against other players in large online games. Co-ops, Teams, and MMOs gives tips and tricks for a variety of games and styles, including role-playing games.

Choose an avatar and jump into the virtual world. This exciting gaming title introduces readers to top game creators, and gives tips and tricks for creating and customizing virtual world games familiar to readers.