Full of delicious recipes, Cool Fish Recipes is sure to inspire young chefs in the making. Kids will learn to make baked fish cakes, whip up some spicy fish tacos and more. This book in the Cool Main Dish Recipes series contains intros to cooking basics and terms, ingredients and tools lists, simple steps and easy-to-follow photography! Aligned to Common Core Standards and correlated to state standards. Checkerboard Library is an imprint of Abdo Publishing, a division of ABDO.

12 Things to Know about the Stock Market

Explores 12 things to know about the stock market. Includes amazing facts along with information about key history and major players.

A beast of a man from Ireland, Sheamus uses his size and strength to punish his opponents. Although his career is young, he has already made an impact in wrestling. He has won many belts, including the WWE Championship. Learn how Sheamus incorporates his heritage into his showmanship and signature moves. He makes his home country proud with every pin.

What is an Echo?

Get answers in this nonfiction storybook to your fascinating questions! Colorful pictures, short sentences, and a small amount of predictable text per page make this book perfect for reluctant and struggling readers. I Wonder Series

Find out what life is like for a professional screenwriter and decide if it is the right career for you.

A book about nouns? How could you have a book without them? Nouns make up the world around us, and they make up most of our writing and speaking, too. With this book, young readers will learn how to identify and use different kinds of nouns.

At first Kaz intends to help the old lady who's fallen in the park. But then he starts thinking about how he never gets what he wants. The next thing he knows, he's running away with her purse. The purse contains only five dollars and a battered watch. When Kaz learns who the old woman is and where the watch came from, he begins to understand consequences in a new way.

This title examines the fascinating life of Justin Bieber. Readers will learn about Bieber's family background, childhood, education, and rise to fame. Colorful graphics, oversize photos, and informative sidebars accompany easy-to-read, compelling text that explores Bieber's music career and the release of his hit albums My World and My World 2.0, his popularity on Facebook, MySpace, YouTube, and Twitter, his personal style, and his fans. Features include a table of contents, glossary, selected bibliography, Web links, source notes, and an index, plus a timeline and fun facts. Contemporary Lives is a series in Essential Library, an imprint of ABDO Publishing Company. 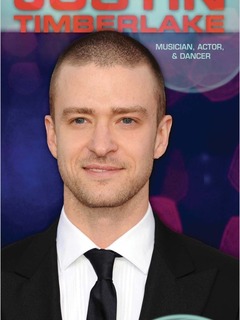 This title examines the fascinating life of Justin Timberlake. Readers will learn about Timberlake's childhood, family, education, and rise to fame. Colorful graphics, oversize photos, and informative sidebars accompany easy-to-read, compelling text that explores Timberlake's early interest in music and acting that led to an appearance on Star Search, his big break on the Disney Channel's popular show The All New Mickey Mouse Club, and the creation of the boy band 'N Sync that released 'N Sync, No Strings Attached, and Celebrity. Timberlake's solo career and the release of his albums Justified and FutureSex/Love Sounds, his acting career, which includes hosting Saturday Night Live and appearing in several movies, including Alpha Dog, Black Snake Moan, Shrek the Third, The Social Network, and Bad Teacher, his MTV Music Video Awards, his Grammy Awards, his collaborations with other singers, his clothing line William Rast, his record label Tennman Records, and his time spent raising money for charities are also described. Features include a table of contents, glossary, selected bibliography, Web links, source notes, and an index, plus a timeline and fun facts. Contemporary Lives is a series in Essential Library, an imprint of ABDO Publishing Company.

Put readers in the driver's seat of a chopper! With vibrant graphics, action-packed photographs, and engaging text, this book will get readers excited about the fast, thrilling world of choppers. Readers will learn how these amazing vehicles are custom built for power and style. Comprehensive diagrams display the main parts of a chopper and its engine. Also discussed are safety measures and chopper history. Features include a table of contents, fast facts, a glossary with phonetic spellings, and an index. Big Buddy Books is an imprint of ABDO Publishing Company.