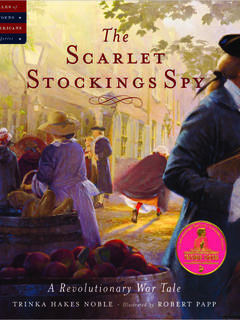 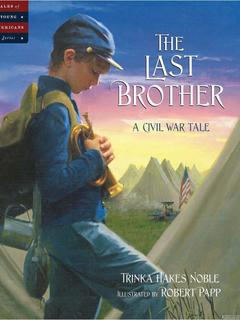 In July 1863 the bloodiest battle of the Civil War was fought outside the sleepy Pennsylvania town of Gettysburg. In The Last Brother the story of one small boy is told amidst the dramatic events of those early days of July. Though he is only 11 years old, Gabe is a bugler in the Union Army. He takes his responsibility very seriously; after all, there are over 60 different battle calls for buglers to learn. But what is even more important to Gabe is watching over his older brother Davy who, as a foot soldier, is right in the thick of the fighting. Two of Gabe's older brothers have already perished, and he is not willing to lose the only one he has left. During those long days, Gabe meets another young bugler -- one who fights for the other side. Suddenly, what was so definite and clear has become complicated by friendship and compassion. Does one have to choose between service to country, to kin or to a friend? As the cannons fire and the battle rages on, Gabe must do his duty while searching for a way to honor all that he holds dear. 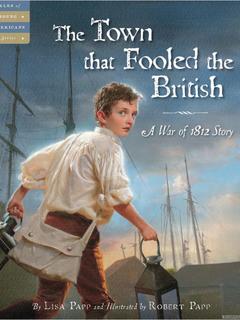 The Town that Fooled the British: A War of 1812 Story

St. Michaels, Maryland, is a town of shipbuilders whose reputation for crafting powerful schooners carries far beyond the shores of young America. And once the War of 1812 starts, that's not necessarily a good thing. For the British have targeted the town as part of their campaign to defeat America in its fight to maintain its independence. And now, in August of 1813 the British fleet is sailing up the Chesapeake River to St. Michaels. The town's militia is assembled but no one expects they can win the fight against the powerful British cannons. Citizens are being evacuated and the town is in turmoil. All young Henry Middle wants to do is find his father amid the chaos of the coming attack. The lanterns he carries will be of use to the militia. As Henry works to conquer his rising fear, he realizes he may hold the answer to outsmarting the British in his very hands. 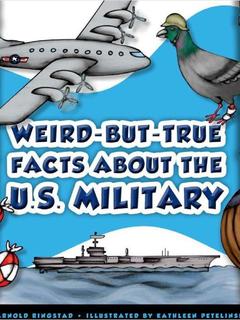 Weird-but-True Facts about the U.S. Military

Loads of quirky, cool, and astonishing facts about the U. S. military, including weapons, wars, and military people. 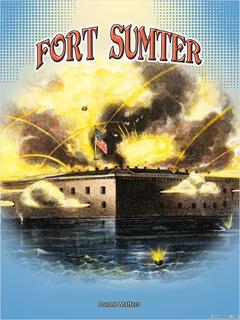 This book explains the construction and significance of Fort Sumter, a national monument and symbol of the Civil War. 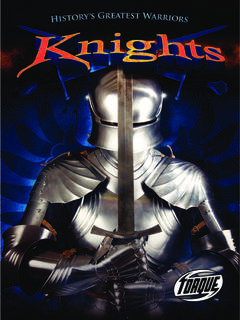 In medieval times, knights could dominate any battlefield. Armed with swords, shields, spears, and lances, they rode their horses into battle and struck fear into their enemies. Readers will discover the tactics, weapons, and tools of knight warfare and why knights remain some of historys greatest warriors. 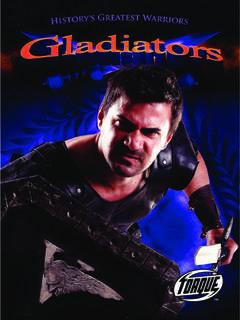 Wealthy ancient Romans got their kicks at the arena, where convicted criminals, slaves, and prisoners of war were pitted against each other in physical combat. The contenders were called gladiators, and they fought until they found relief in victory, mercy, or death. Readers will be fascinated by the gladiators life in training and battle. 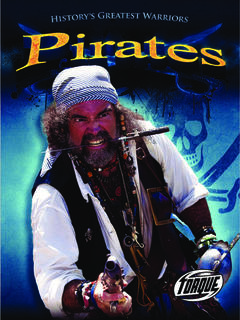 Avast, me hearty, or yell be walkin the plank! or so wed like to think. Pirates had a host of punishments for their unlucky captives, but walking the plank is likely just a myth. Learn what high-sea hijinks brought pirates a deadly reputation unless ye be too lily livered! 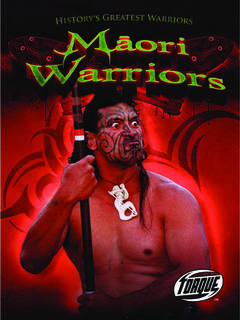 Maori warriors would unnerve the enemy with their dances called haka. The peruperu was a war haka performed before battle. In it, the warriors would wave their weapons and contort their faces to summon the god of war and warn the opposition of their fate. Find out how successful they were in this thrilling title of bravery, weapons, and war. 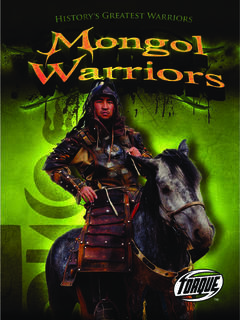 Mongol warriors were expert archers. They used this skill in battle, where opponents met a slew of arrows born of Mongol cunning and craft. Howling arrows whistled as they descended into enemy lines, sending assailants into a panic. In this book, kids will learn more about Mongol weapons, gear, and training. 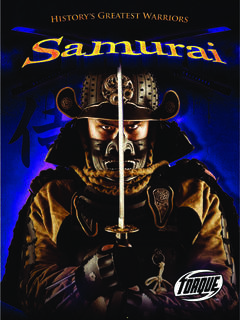 The samurai were the warrior class of feudal Japan for hundreds of years. They led other soldiers to war on the battlefield, and their weapons and armor made them formidable opponents. Readers will learn the history of the samurai, their weapons and fighting styles, and what ultimately led to their decline. 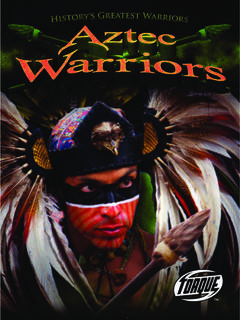 Every male in the Aztec civilization received military training. The most feared fighters on the battlefields were eagle warriors and jaguar warriors. This title explores the history of these fierce warriors, the tools and tactics they used in battle, and what ultimately led to their downfall. 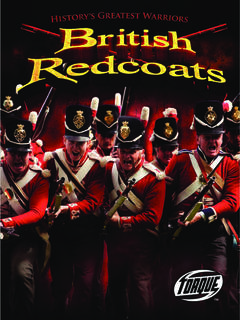 For over 200 years, the British redcoats were the most feared infantry on Earth. The discipline with which they fought was enough to defeat almost any foe. Readers will learn about the history, training, and weapons that made them such effective soldiers. 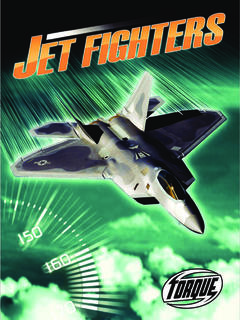 The high maneuverability and speed of jet fighters cause pilots to experience g-forces nine times that of gravity! Students will learn about the history, technology, and future of the fastest jet fighters in the world. 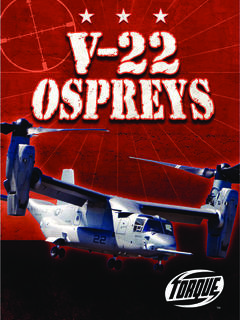 Part airplane and part helicopter, the V-22 Osprey hovers in the air as U.S. Marines jump behind enemy lines. Kids will learn about the V-22 Osprey's vertical take-off and landing, defensive weapons, and the dangerous missions this unique machine performs. 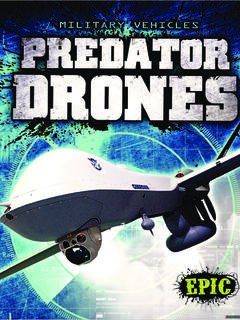 Predator drones use cameras and sensors to help the United States Air Force gain valuable information about the enemy. They can also be used for strategic strikes. Readers will find out how predator drones work, what kinds of missions they are sent out to perform, and how a pilot thousands of miles away can safely control one. 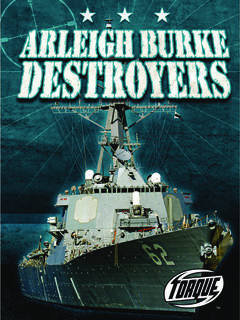 Loaded with guns, torpedoes, and guided missiles, Arleigh Burke Destroyers are always ready to protect U.S. Navy warships. Young readers will learn how these destroyers use the latest technology to defend the fleet and carry out attack missions. 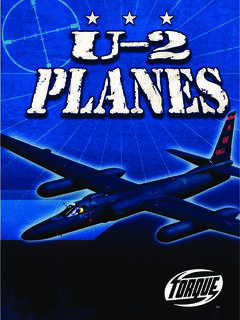 Soar 90,000 feet above Earth's surface in the majestic U-2 spy plane, which has been a key tool in gathering intelligence over the last 50 years. Students will learn about the history of the U-2 plane, the technology it uses, and what kind of missions this spy plane is sent out to perform. 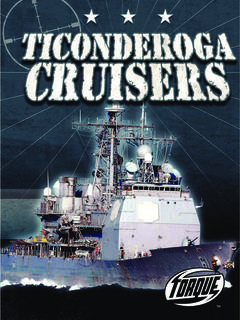 Ticonderoga Cruisers use their advanced Aegis System to defend U.S. Navy warships. Young students will join these guided-missile cruisers in action and read about the advanced weapons and features they use to complete their missions. 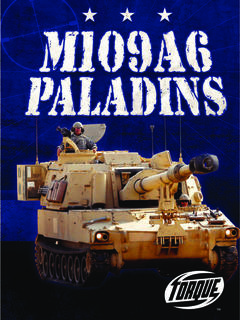 The M109A6 Paladin is a large, mobile howitzer. It can fire rounds several miles to support ground forces. Readers will learn about the features that make the Paladin successful, how it performs on the battlefield, and common Paladin missions. 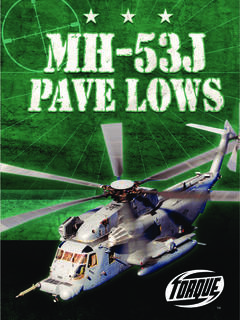 The MH-53J Pave Low's main mission is to pick up and deploy troops behind enemy lines. It flies low to the ground and uses advanced technology to sneak in undetected. Young learners will find out about these technologies, read about the Pave Low in action, and learn about the crew that makes dangerous Pave Low missions successful. 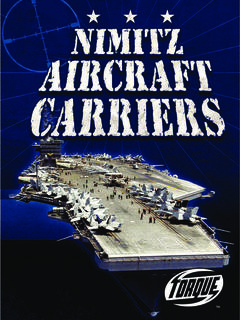 The largest capital ships in the world, Nimitz aircraft carriers are filled with cutting-edge technology and several kinds of planes. Students will discover the history, technology, and missions of this backbone of the United States Navy. 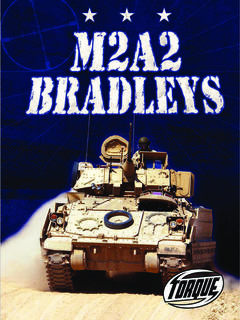 The M2A2 is an infantry fighting vehicle (IFV) used by the United States Armed Forces. It transports, assists, and protects infantry. Students will learn about the history and technology behind this vehicle that is often on the front lines of battle. 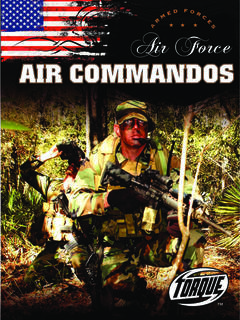 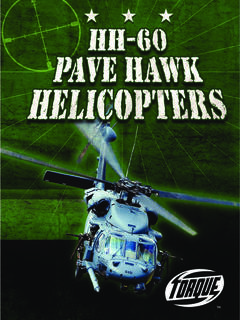 When there is a search and rescue mission to be done, the HH-60 Pave Hawk gets the call. Fast and maneuverable, Pave Hawks have several tools to help them locate people in need of rescue. Students will learn about the history of the Pave Hawk and how it executes its dangerous rescue missions.