Jeremy and the Enchanted Theater

Jeremy should be at home eating his supper. Instead he has traveled through time with a cat named Aristotle to Mount Olympus, home of the Greek gods. Neither he nor Aristotle has any idea how to get home, let alone how to help Mr. Magnus lift Zeus's curse on his theater, where no play has been performed for years. Not knowing what else to do, Jeremy and Aristotle climb toward the summit, finding adventure all the way.

Jeremy and the Fantastic Flying Machine

Jeremy and his cat Aristotle must solve one more riddle to save the Enchanted Theater. Once again they travel through time and space. Once again they face their fears, this time deep in a maze beneath the ground and high in the sky above ancient Greece. If they succeed, the enchantment will be lifted. If they fail...

In this retelling of a Jewish folktale, Jacob tries to stump Rachel with his best riddles but fails repeatedly. When a young woman in need of help presents Rachel and Jacob with the trickiest riddles of all, they discover the only way to solve them is to work together.

Finn loves to swim with the seals in a secret cove. He arrives at the cove one day and rescues a young seal tangled in netting. Finn wishes the seal could live on land. That night the seals sing. "No good comes from seal songs," says Finn's father. When Sheila, a mysterious girl no one has ever seen before, appears on the cannery docks, the fisher folk are uneasy. They believe the newcomer is a magical selkie, a shape changer. 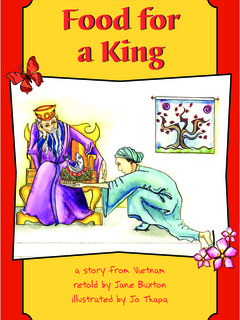 Food for a King

The king is ready to step down and must choose one of his many sons to replace him. A contest will determine who inherits the throne.

The greedy Leprechaun King has locked away all the luck in Ireland and the whole country has fallen in to despair. Through clever charades, Fiona outwits the Leprechaun King and restores luck to the land. Luminous illustrations add to the magic and wonder of this original folktale.

What if you were given a locked box as a gift and told to never open it? Pandora received this gift from Zeus, the head of the Greek gods. What could be so important that it needs to be padlocked shut?

The Fox and the Raccoon-Dog

Who is the best trickster in Japan? Let the games begin!

Hitchiti legend has it that hummingbirds ate fish. In this pourquoi American Indian tale, you'll hear an explanation of why hummingbirds dine only on nectar today.

King Midas and the Golden Touch

In this retelling of the Greek myth, King Midas loves gold more than anything else in the whole world! Or at least, he thinks he loves gold the most.

The Dog and the Wolf

Is it better to be a dog without freedom who has his meals provided or a wolf who is free and captures his own food? Read this Aesop's tale and decide.

Can Kanchil, the little mouse deer, trick a few crafty crocodiles with giant teeth? This Malaysian trickster tale gives a humorous insight into the difference between right and wrong.

Cowboy hero Pecos Bill has one true love and that is Sluefoot Sue. He first sees her when she is riding a catfish down the Rio Grande.

What happens when two gods from Greek mythology want to rule a town? The townspeople are afraid of a fight between two powerful gods. A contest is set to decide the winner.

How Rabbit Lost His Tail

Have you ever seen a fluffy bunny tail? They are puffy like cotton balls. Did you know rabbits used to have long tails like squirrels?

Why the Sky Is Far Away

This is a Lakota Indian tale about Iktomi, a lazy trickster who cannot be bothered to hunt for himself. Instead, he plays tricks and steals rather than earn an honest living. Will Muskrat teach him a lesson?

Medusa brags and brags about her beauty. She loves to look in the mirror. She loves to tell others that she is the prettiest. Find out what happens when a young lady spends all of her time bragging.

This African American tall tale tells of John Henry, who was as big as an oak tree in overalls! He is famous as the strongest railroad worker in the East, West, North, and South. Read about the hardest worker that ever was!

The Hodja and the Soup

A poor, hungry man has to pay for simply smelling soup! Here comes the wise Turkish folk hero Hodja to the rescue. What will he do to help?

Paul Bunyan was the biggest baby boy ever born! At one week old he had to wear his father's clothes! And he continued to grow!

How Chipmunk Got Its Stripes

Do you know why all chipmunks have three stripes down their backs? This pourquoi tale gives a creative explanation as to how this happened. This tale originated with the Seneca Indians.

Kumba and Kambili: A Tale from Mali

When a village is terrorized by a lion, the hunter Kambili wishes to track down the beast. But his wife Kumba warns that the lion is an evil wizard. This is an adaptation of a Malinke story.

The Ant and the Grasshopper

Grasshopper thinks Ant should stop working so hardbut what will happen when winter comes?