Hello, How Are You

Learn basic English phrases like, "How are you?" and "What time is it?" through this interactive book. Early learners will find the simple text, paired with reassuring illustrations, easy to understand.

Watch Out for Wolfgang

Paul Carrick recycles The Three Little Pigs into a humorous fractured fairy tale about being yourself. An old mother robot sends her three sons, Rod, Slick, and Dudley, out into the world to seek their fortunes. But Wolfgang the Recycler is after them for their precious parts. How will the three robots protect themselves and their factories from clever Wolfgang?

Spot is hungry but can't find anything to eat. Spot buries his biscuit to keep it safe. Spot sniffs around outside to capture different scents. Spot hears his favorite sound… dinner! Spot enjoys different times of day. Stories by Marileta Robinson.

Fans of Olivia and Lilly will delight in Poppy, a little rabbit with big dreams - and an even bigger personality. More than anything, Poppy wants to be a verrrry famous writer. She's sure Mrs. Rose will pick her paper to read to the whole class! Trouble is, she has tall ambitions but is short on effort, and her jealousy takes over when her best friend's paper is chosen instead. In the end, Poppy discovers that she has to get out of her own way if her big dreams are going to come true. Rosalinde's adorable, expressive illustrations make memorable, quirky Poppy a real star!

Lola Gets a Cat

Lola wants a cat, but Mommy says taking care of a pet is a lot of work. So Lola does her homework. At the library she finds books about cats and pet care and she and Mommy learn as much as they can. She pretends her stuffed kitty is real and practices taking care of it. When the time comes, Lola is allowed to pick out her new friend at an animal shelter. With patience and care, her kitten settles in at home. Lola is a book-loving favorite, and this delightful story is a new treasure in the series.

A humorous retelling of an Italian tale in which a Genoese merchant, richly rewarded for solving an irritating problem for the king of the Spice Islands, causes a greedy rival to try and gain a fortune in the same way.

Evan in the Middle

Being in the middle can be hard. Evan is in the middle of his family and he doesn’t know where he fits in. He’s too small to play with his older brothers but too big to play with his younger brother and sister. He just wants to be big. Being big will make everything better – right? Paired to the nonfiction title Your Family Tree.

Jaylah’s family is thrilled that everyone will be together soon in Florida. Except Jaylah. Thinking about what will happen when she gets there is making her tummy feels like it’s full of buzzing bees. That’s why she decides to make a plan that will get her out of the whole scary affair. But will her plan ruin everything for the people she loves? Paired to the nonfiction title Everyone Visits Family.

Deano was a star soccer player at her old school in Jamaica but she’s in a new school now, and things are so different. What’s this No Girls Allowed rule during recess? Jay is different from the other kids in her class. He reads with his fingers and has a cool dog he gets to bring to school! As Deano gets to know Jay, they realize they have a common interest: soccer. But how can Jay play soccer if he is blind? Will Deano ever be accepted by the soccer players even though she’s a girl? These relatable books with simple sentences and illustrations in every chapter, make them the perfect first chapter books for young readers. Paired to the nonfiction title Respecting Diversity.

Bully the bullfrog lives in a pond full of lilies. The flowers are beautiful, fragrant, and enjoyed by the many other creatures that also inhabit the pond. The pond is a very pleasant place to live. Or it should be. Instead, Bully decides that only he should be able to enjoy the beautiful lilies. He demands that the other inhabitants of the pond leave. And once Bully has the flowers to himself, his selfish behavior almost destroys them. Can anyone stop Bully and his bullying ways? As it turns out, the answer is YES! Using humor and whimsy, author-illustrator Jennifer Sattler masterfully shows young readers that standing up together can make all the difference in the world.

The holiday season is a busy time, with people bustling about. And it's a busy time for Edgar, a cabdriver who conveys passengers around the city. All day long Edgar drives his cab; many people going to many different places. At the end of one busy day, Edgar is so tired he climbs into the backseat of his cab to take a nap. But he discovers he is not alone. A little hamster has somehow been left behind from one of the many fares Edgar has driven. Edgar dutifully reports the hamster to the cab company's Lost and Found department, but in the meantime the little creature needs to be taken care of. Edgar brings the hamster to his apartment, making it a bed, feeding it, and even giving it a name, Chickpea. As Edgar starts his Hanukah observance, with no family nearby to share in it, the little hamster becomes more than a casual companion to the lonely man. But what happens when Chickpea's owner is found?

Yo ho ho! It's the first day of kindergarten. Just imagine all the fun things to learn and experience! And who better than a pirate captain to drive the bus to school? He's ready to share all the rules one needs to know to ride the bus and to get along with mates at school. But with the anticipation of the first day of school there also comes a bit of anxiety. And it turns out that being a big, blustery pirate captain is no guarantee against feeling insecure and a little frightened in strange and uncomfortable situations. Who can help a rough and tough pirate captain get over his fears and back to driving the school bus? Using humor and pirate-speak, Kindergarrrten Bus addresses some of the concerns and anxiety that many children feel on their first day of school or at the start of any new undertaking.

The Well of Truth: a folktale from Egypt

When Goat, Rooster, and Donkey decide to try their hand at farming, Donkey learns the price of being greedy and discovers that the truth will always come out in the end.

Pirates in the Library

Prepare to set sail for the adventure of a lifetime with fierce Captain Jack when he discovers a treasure map that leads him, his crew (and a parrot, too) right to the library. Mrs. Benitez, the libarian, welcomes them - as long as they behave! The pirates' search is on!

The rich Native American tradition of carrying babies safely, comfortably and close to their mothers in cradle boards endures to this day. Cradle Me celebrates Native American families and shows how they carry their babies and, with a fill-in-the-line feature, enbables readers to translate the words to write their own language.

A crocodile named Snout assists his animal neighbors by ferrying them across a swollen river, then is repaid for his good deeds when he is in need of help.

Let's Get It Started

After one of Meg's teachers has a new baby, Meg suggests that the class make a present for the baby. Can Meg help get the project started? MySELF (Social Emotional Learning Foundations) helps children build social and emotional intelligence and literacy skills through shared reading of engaging texts that prompt discussions about real-world experiences. Child-centered themes support social and emotional growth, address Common Core Foundational Reading Skills Standards, and integrate family involvement with classroom instruction. Stories are written from the first person perspective and center around a diverse group of relatable children. Real-world photos, high-quality illustrations, and delightful narrators aid in teaching social and emotional skills without a heavy-handed approach.

Experience the adorable first adventures of childhood with this picture book from bestselling author Charles Ghigna and celebrated illustrator Lori Joy Smith. From the first slip down a slide to the first time picking out a book to read, this rollicking narrative takes readers on a journey of discovery into the memorable firsts in a child's world. A story that will be enjoyed by the whole family, from the youngest, eager to experience their own adventures, to the oldest, so proud to watch them grow.

After attending her school’s pet show, Libby is inspired to teach her goat, Elvis, some tricks. But Elvis won’t catch a Frisbee. He nibbles on socks, rather than folding them. And he can’t speak French. Then Libby has an idea. She realizes Elvis is already great at making friends and making people laugh. Elvis will make the perfect therapy goat! Aligned to Common Core standards and correlated to state standards. Calico Kid is an imprint of Magic Wagon, a division of ABDO.

When Hank leaves his bike in the driveway to be run over by his dad, he needs to help pay for a new one. But Hank is a kid. What can he do? Pet-sitting sounds easy! But Hank’s first customer is huge, homesick Otis. When Janie, Hank’s pesky next door neighbor, tries to help, things spin even more out of control. What if Otis isn’t just homesick? And what if Hank and Janie can’t get him to the vet in time? Aligned to Common Core standards and correlated to state standards. Calico Kid is an imprint of Magic Wagon, a division of ABDO.

The children in this book learn and share about themselves. Maybe you can find ways to learn more about yourself, too! 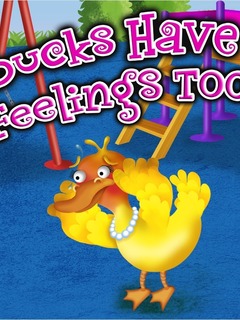 Ducks Have Feelings Too

Chester Fox makes fun of Sara Duck's big feet until her big feet help them out of an unfortunate situation.