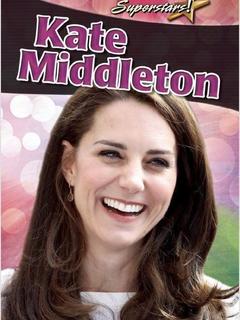 Kate Middleton became a household name around the world when her engagement to Britain’s Prince William was announced in 2010. Since becoming the Duchess of Cambridge, she has built a lasting legacy as an inspiring philanthropist, positive role model, fashion influencer, and devoted mother. With her ever-growing influence around the world, Kate Middleton has sparked a new generation’s interest in the British monarchy. 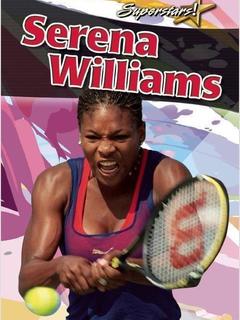 One of the top tennis players of all time, Serena Williams is both a powerhouse athlete and a philanthropist. This energizing title tells her inspiring story, from learning to play tennis along with her sister Venus from their father in Compton, California, to Serena's record-setting 23 individual Grand Slam titles. Serena’s dedication, perseverance, and global activism on behalf of underprivileged people and for equal justice make her a role model for people around the world. 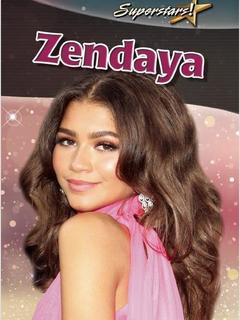 From Disney star to blockbuster actor, fashion influencer, singer, and activist, Zendaya is making waves in Hollywood. This remarkable book shows that her fun, relatable persona and outstanding acting and singing chops aren’t the only reasons that she is a role model for girls and women around the world. She also champions her self worth, and is a figure for causes such as female empowerment and racial equality. 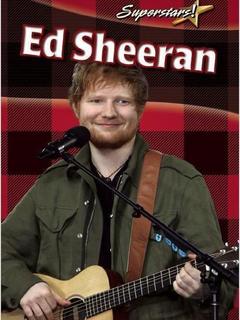 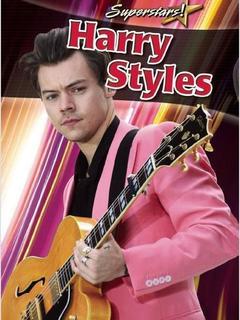 Harry Styles first rose to international fame as a member of the pop group One Direction, which took the world by storm after its members were discovered on The X Factor. But his successful solo music ventures and fresh acting career have proven that Styles is much more than just a teen heartthrob and pop sensation. Learn more about the life of this talented young star and his rise to fame as an independent singer and actor. 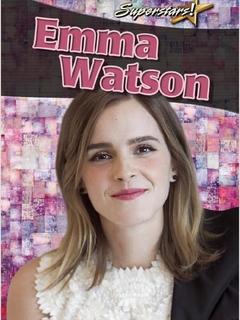 Bursting onto the world stage at the age of 11 as Hermione Granger in the film version of Harry Potter, Emma Watson has since become an acclaimed actress, voice for social change, and style icon. This intriguing book follows her rise to fame, navigating from child star in England to grown-up acting roles, and using her widespread influence to work as an activist for gender equality around the world. 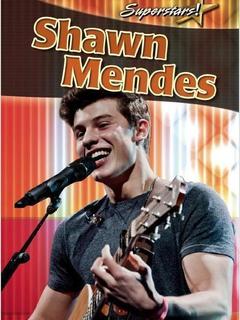 From online singing sensation to international superstar, boy-next-door Shawn Mendes is one of the world’s biggest young stars. Born and raised in Pickering, Ontario, Shawn first gained attention by singing cover versions of songs, which he posted online to quickly garner a huge, grassroots fan base—and eventually a record deal. Learn how the singer’s hard work and dedication helped him become an award-winning artist, and a voice for positive change. 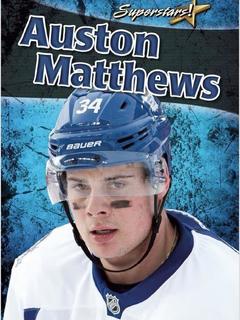 Following an outstanding NHL rookie season, which ended in his winning of the Calder Memorial Trophy for best overall rookie, Auston Matthews has quickly become known as one of the league’s top hockey players. From his childhood beginnings in Arizona to being the first overall draft pick for the Toronto Maple Leafs, this exciting book helps readers find out how the hockey star has skated his way to stardom. 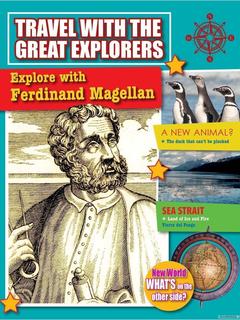 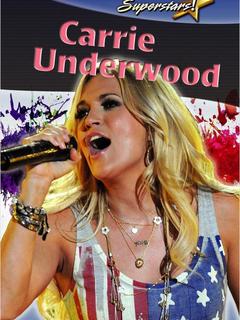 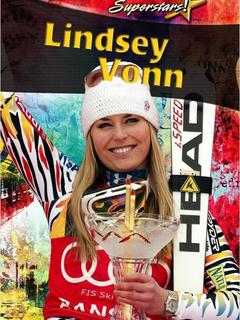 American champion downhill skier Lindsey Vonn has won four World Cup titles as well as gold and silver in the 2010 Olympics in Vancouver. This intriguing book follows Lindsey's life and career from the very beginning through a variety of sports-related injuries and ultimately to the fulfillment of her dream. After her Olympic win, Lindsey became a fan favorite, appearing on talk shows and signing a number of product endorsement contracts. All eyes are on Lindsey now as she trains for the 2014 Olympics in Sochi, Russia. 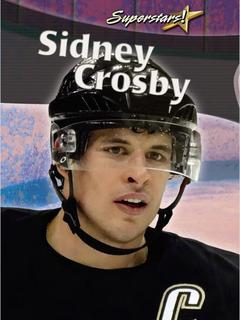 Sidney Crosby skated into the limelight from the very start of his hockey career. In only his second season playing in the NHL, Sid the Kid became the youngest player ever to get over 100 points in a season. This book follows his amazing life story, from boyhood games on the ponds of Nova Scotia to captain of the Pittsburgh Penguins and the Stanley Cup in 2008. Crosby remained a league leader until the 2010-2011 season when he suffered a concussiona head injury that still has consequences for him today. 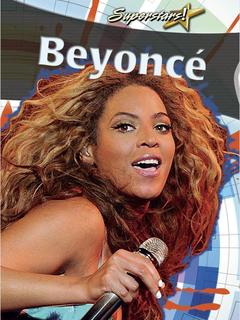 Contemporary R&B artist Beyoncé Knowles has always loved to sing and dance. Entering competitions as a young child, she burst into stardom as a member of Destiny's Child. This fascinating book takes a close-up look at Beyoncé's life and career including her mega success as a solo artist. Also an actress and a philanthropist, the story of this multi-talented performer has only just begun. 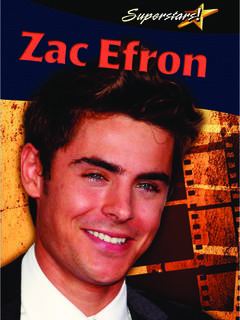 Most people came to know Zac Efron as Troy Bolton, the star athlete with hidden musical talents in the High School Musical movies. Today, Efron's talents as an award-winning actor and singer are far from hidden from movie-goers and from his millions of adoring fans. 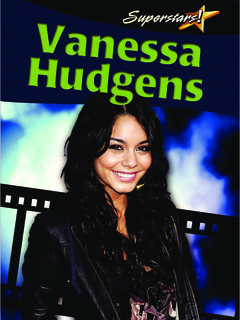 When Vanessa Hudgens stepped onto the stage to try out for a role in High School Musical, she was one of over six hundred hopefuls. At that time, she was not well known. But the producers were blown away by her audition, and she was chosen for a leading part. It was this role that put the young singer/actress on the path to superstardom. Hudgens has now starred in a number of movies, released several albums, and won awards for her work as both an actress and a singer. 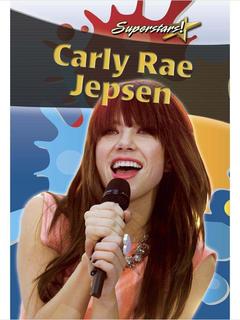 Carly Rae Jepsen grew up in Mission, British Columbia. After graduating from high school, Carly was a hopeful on the television competition Canadian Idol. She finished third, but her story didn't end there. This entertaining book describes how Carly persevered and released her first album independently, then became an international sensation through MySpace, Twitter, and YouTube - with a little help from Justin Bieber. 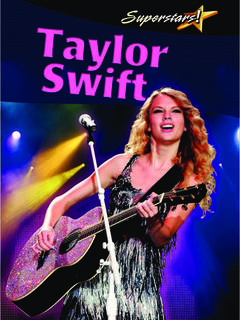 Not many years ago, country music sensation Taylor Swift was singing karaoke and learning to play her first guitar. Today, the superstar singer and songwriter performs sold-out concerts around the world. Her albums sell millions of copies, she's won numerous music awards, and she's been on the cover of just about every popular magazine. 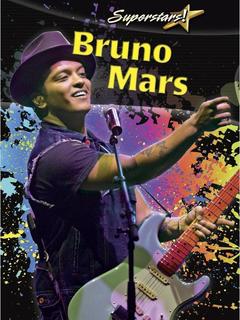 Growing up in a family of musicians, Bruno Mars started his music career performing at a young age in his hometown of Honolulu, Hawaii. After high school he moved to California and began producing music for other artists before embarking on his own solo career. This amazing book describes Bruno Mars' early life and how his debut album sent him to the top of the charts worldwide. With a wide range of musical influences, it's no surprise that this multi-talented singer won Best Male Pop Vocal Performance at the Grammys only a year later. 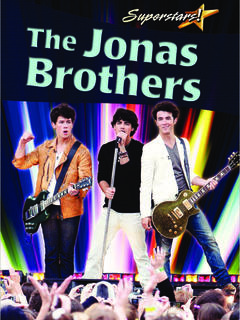 The Jonas Brothers - Kevin, Joe, and Nick - have brought boy bands back in style. The pop-rock group has sold more than eight million albums worldwide and toured the globe, playing sold-out shows and capturing the hearts of adoring fans. With their positive, uplifting songs and strong sense of family and their faith, they have also redefined what it means to be cool. 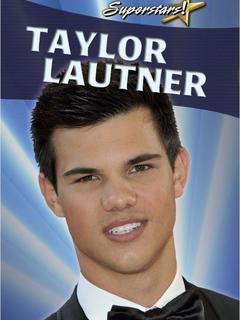 This exciting biography traces Taylor Lautner's astonishing rise to fame. Readers will learn about his childhood in Michigan, his passion for martial arts, and how his determination and drive have led him to superstar status! Full-color photographs, personal stories, and quotes from the actor himself, give fans the inside scoop on one of Hollywood's rising stars. 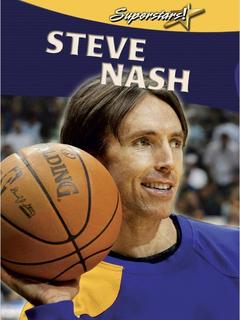 One of the greatest point guards in the game of basketball, Steve Nash beat the odds at six feet, three inches to excel in a sport dominated by six-foot, seven-inch players. Born in South Africa, Steve grew up in Canada and was drafted to play in the NBA in the United States. This interesting biography follows his career from the Phoenix Suns to the Dallas Mavericks, then back to Phoenix. Fans will also get a glimpse into Steve's years growing up and his selfless attitude both on and off the court, including his generous work with charities around the globe. 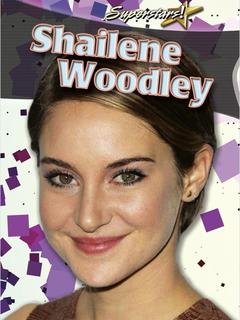 Born in California, Shailene Woodley almost became an interior designer before landing a starring role in the TV series The Secret Life of the American Teenager. This book follows the intriguing story of her rise to fame, from her breakout movie role in The Descendants to her star-making role in The Fault in Our Stars to her superstar status today as Tris in the Divergent movies. 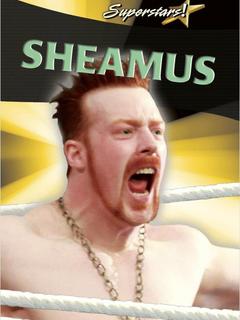 Shephen Farrelly is better known to fans of the WWE as Sheamus, a Celtic warrior who became the first Irish WWE champion. Born and raised in Ireland, Stephen grew up playing a lot of sports. His father was an amateur bodybuilder and he followed in his path. His career in professional wrestling, however, almost had an early finish when a neck injury sidelined him for two years. But he came roaring back and the rest is history. This interesting biography follows his career in the WWE, as well as his several acting roles. Fans will also get a glimpse into Stephen's years growing up, his rise to fame, and his plans for the future. 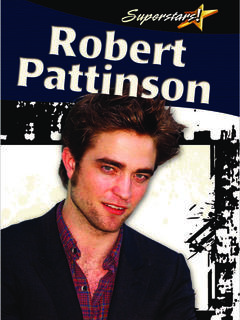 Robert Pattinson became famous around the world for playing a dreamy vampire in the Twilight movies. The romantic fantasy films have rocketed the British actor to fame. Pattinson is more than just a bloodthirsty heartthrob with great hair, however. He has starred in several plays and films, is a talented musician, and has won awards for his acting - and even his kissing! 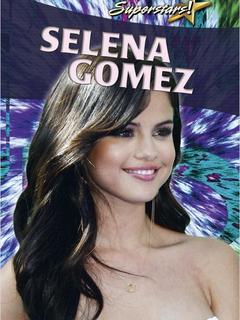 Talented actress and singer Selena Gomez has definite star quality. From her early start on Barney and Friends to her starring role on the hit TV show Wizards Of Waverly Place, Selena Gomez has millions of fans around the world. This entertaining biography highlights the life and accomplishments of the young star, including her childhood, her rise to fame, her work as a Unicef Ambassador, and her plans for the future.