This books helps students learn how to harness the power of video to inform and entertain. Includes background information and practical hands on activities.

An instructional guide created for youngsters tells them what they need to know to capture and share those special events digitally.

Part of the Career and Tech Education series, this book explains many aspects of the job of a Multimedia Artist and Animator, including training and skills needed.

Follow the step-by-step process of designing clothing and find out what it's like to work in the fashion industry.

Discover the many roles a professional music producer has to fill and learn about the music business.

Learn about the many different paths to becoming a professional musician and find out if it's the right career for you.

Learn how to create computer-generated 3D models like the ones used in video games and animated films. Readers will blend their art and technology skills as they learn how to use the program SketchUp. Photos, sidebars, and callouts help readers draw connections between new concepts in this book and other makers-related concepts they may already know. Additional text features and search tools, including a glossary and an index, help students locate information and learn new words.

Learn how to think critically about the design of things you want to make. Readers will learn to analyze the efficiency of their plans, while still feeling encouraged to push forward with new ideas. Photos, sidebars, and callouts help readers draw connections between new concepts in this book and other makers-related concepts they may already know. Additional text features and search tools, including a glossary and an index, help students locate information and learn new words.

Learn how to recycle old clothes into brand-new fashions with these fun do-it-yourself activities. Readers can practice basic sewing skills to make their t-shirts more stylish and unique. Photos, sidebars, and callouts help readers draw connections between new concepts in this book and other makers-related concepts they may already know. Additional text features and search tools, including a glossary and an index, help students locate information and learn new words.

After 12-year-old Anya is cut from her middle school soccer team, she decides to pursue her true passion, which is theater. With the help of her sister and new friend Austin, Anya puts together a kids' summer theater troupe (The Random Farms Kids' Theater), recruiting area kids as actors and crew members. Acting as director, Anya has to navigate the ups and downs of a showbiz life, including preparing scripts, finding a venue, and handling ticket sales, not to mention calming the actors insecurities and settling conflicts. Its a lot of responsibility for a 12-year-old. Will their first show ever get off the ground? This series is closely based on the real-life experience of Anya Wallach, who began a summer theater camp in her parents basement when she was just sixteen years old. Today, Random Farms has launched the careers of many of today's youngest stars on Broadway.

Thirteen-year-old Quest (Q) isn't sure he's ready for a new family. For a long time it's just been him and his mom, Blaze. But everything changes when Blaze falls in love with Roger and they start a new rock band called Match. Now they're married, have a hit record, and Match is going out on a year-long driving tour across the country. Q, along with new stepsister Angela, will take a year off from school and travel with the band. For now, home will be a luxury motor coach and homework will be a Web site diary of their travels. Perfect-Q can practice his magic tricks and Angela can read her spy novels. What can go wrong? As Q and Angela settle into their new life and new relationship as siblings, they start to notice that certain coincidences don't seem coincidental. For example, how does a band roadie named Boone find them in the middle of a desert where their coach just happens to break down? Why does a man from their parents' wedding keep showing up in the same cities they stop at? When they reach Philadelphia, Q and Angela realize this tour is definitely not the trip their parents had planned and that the "City of Brotherly Love" is full of mysteries and secrets that could threaten their new life together. Book 1 in the series.

Discover how technicians create the stunning special effects in your favorite movies.

Find out what life is like for a professional screenwriter and decide if it is the right career for you.

Marian Anderson broke through discrimination and racism to become one of the greatest classical singers of all time. Her exceptional talent allowed her to travel to many countries to perform, showing the world firsthand that the color of one's skin does not determine one's talent or inner strength.

Jonah Robinson wanted to entice people to South Dakota, so he proposed building a monument out of a mountain. Robinson found Gutzon Borglum, a talented sculptor who took on the incredible task. Reading Essentials in Social Studies. 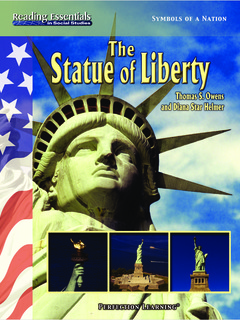 The Statue of Liberty

France wanted to show its support of American democracy by giving the country a gift for the centennial. This gift would become the Statue of Liberty. Reading Essentials in Social Studies.

Telly Mercer is shy and quiet, used to living in the shadow of her older sister, Bess. Then she finds herself on the set of a puppet show, staying out of the way of her over-stressed Aunt Kathleen. One evening she makes a surprising discovery that launches her on an adventure with an unpredictable and angry puppet.

Adam Sandler is one of the world's most popular actors, and is known for his wildly creative sense of humor, which launched him to television and film stardom. He first became famous as a cast member on Saturday Night Live during the early 1990s. Fans loved the wacky characters Sandler created on the show, such as Cajun Man and Operaman. They were also impressed with the bravery he showed by being willing to do anything to make people laugh. Sandler used that same comedic genius to become a star in movies such as The Waterboy, Big Daddy, and Grown Ups. He has also made films like Reign Over Me, which show he is a fine dramatic actor. And Sandler not only acts in movies but also makes them. He started Happy Madison Productions so he could create films that reflect his unique sense of what is funny.

During his career as a professional wrestler, Dwayne The Rock Johnson thrilled wrestling fans everywhere. Known as the People's Champion, the Rock was a wrestling superstar whose dynamic and colorful personality attracted attention both inside and outside the ring. His feuds with other wrestling greats resulted in some of the most talked-about matches in wrestling history. He became the first African American to hold the World Wrestling Entertainment World Championship title, one he went on to capture six more times. This book describes how Dwayne Johnson, the son and grandson of professional wrestlers, became the Rock and, in his own words, the most electrifying man in sports entertainment. It details his failed ambition to become a professional football player and how that failure led him into the family business of wrestling. Eventually, the Rock built a successful wrestling career, and ultimately became a movie star as well.

In 1993, when two young, unknown actors named Matt Damon and Ben Affleck couldn't get the movie parts they wanted, the lifelong friends decided to write their own screenplay. To their surprise, Good Will Hunting, a story about a blue-collar math whiz, became a box office hit after it premiered in 1997. It won an Oscar for Best Original Screenplay, and Matt became one of the hottest young actors in Hollywood. Since then, Matt has starred in many memorable films, such as Saving Private Ryan, The Departed, and Invictus. One of his most successful roles is that of assassin Jason Bourne, a character he played in three hit films. Matt likes to keep his personal life private. However, he doesn't hesitate to use his celebrity to help others. Among the groups he supports are the ONE Campaign and H2O Africa Foundation, which are charitable organizations working to improve living conditions in Africa.

Using the graphics, students can activate prior knowledge--bridge what they already know with what they have yet to learn. Graphically illustrated biographies also teach inference skills, character development, dialogue, transitions, and drawing conclusions. Graphic biographies in the classroom provide an intervention with proven success for the struggling reader.

The author of Urban Animals, Isabel Hill once again captures images of creatures large and small that adorns the buildings all around our nation's capital. Includes a glossary of architectural terms and a list of buildings where each animal resides.

At a Battle of the Bands event, Ace and his best friend Denny notice that girls like musicians, no matter how dorky the dudes might be. Having so far been severely challenged when it comes to meeting girls, they decide to start a band. Ace discovers that he loves playing guitar and electric bass. While Denny tweets their every move and their clean-freak drummer, Pig, polishes everything in sight, Ace tries to write a song that will win at the next local teen songwriting contest. It's more difficult than he thought it would be. When Denny brings a great tune to rehearsal, Ace is devastated that Denny, who rarely practices, is a better songwriter than he is. The contest is only days away when Ace discovers that Denny stole the song, and Ace has to decide if winning is worth the lie.

Maddie has big-city dreams, and this summer she's found her chance to visit New York. An art magazine is holding a portrait painting contest, and the first prize is an all-expenses-paid trip to the Big Apple. Maddie plans to win, but her mother has different plans for her: a mother-daughter adventure in organic farming. Maddie is furious. How will she find an inspiring subject for her portrait amid the goat poop and chickens? And worse, her new age mother's attempts at pig reiki are an embarrassment. But Maddie befriends the farmer's daughter, Anna, and between dodging her mother and doing her chores, she finds the perfect subject for the portrait contest.