Highlights fascinating facts about dinosaurs, from their first appearance on Earth to their extinction 65 million years ago. Learn about a dinosaur nicknamed after a rock star, a battle between two dinosaurs that are forever captured in a series of fossils, the dinosaurs as long as a jumbo jet wing, and more! Additional features include a table of contents, a phonetic glossary, an index, and sources for further research.

Gliding quietly along the banks of a river, crocodiles are formidable members of the animal kingdom who don't give their prey much warning. Young readers get a glimpse at various crocodile species and habitats and learn about the hunting skills that make these creatures famous. Informative text and exciting pictures introduce kids to the incredible reptiles that have prowled our planet for millions of years.

The Threatened Lives of Chimpanzees

Gives readers an up-close look at the serious threats facing chimpanzees and the ways in which the animals are adapting. Includes a concise overview of the species, a table of contents, questions to spark critical thinking, a selected bibliography, sources to guide further research, a phonetic glossary, an index, and an introduction to the author. 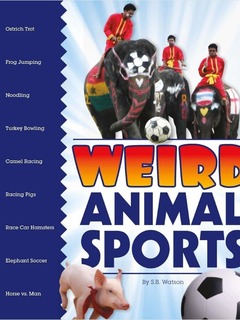 Animal sports can be found all around the world. But this fun,informative book takes you beyond horse- and dog-racing to the weird world of turkey bowling and ostrich racing.

How do dinosaurs pay their bills? With Tyrannosaurus checks! What should you do if a dinosaur sneezes? Why, get out of the way, of course! These are just two of the dinosaur jokes that will have you laughing and rolling on the floor until your stomach is, well, saurus.

Did you ever wonder what the difference is between a fish and a piano, or what you call a sleeping cow? Young readers will enjoy a clever and creative selection of riddles and jokes related to four-legged, feathered, and finned creatures.