Ten of the Best Adventures in Frozen Landscapes

Ten exciting stories feature famous explorers and their struggles to survive in frigid temperatures during dangerous polar expeditions. Stories include: the last expedition of John Franklin, Salomon August Andrée's attempt to reach the North Pole by hydrogen balloon, Ernest Shackleton’s journey to rescue his ice-locked crew, Riiser-Larsen and Amundsen’s crash in the Arctic, and the crash of Umberto Nobile’s airship Italia. Feature boxes and maps add additional details and help readers better understand the explorer's journey and the time period in which the expedition took place.

Ten of the Best Adventures in New Worlds

Ten exciting stories feature the hardships encountered by famous and sometimes brutal explorers in their quests to discover new lands. Stories include: Hernán Cortés and the Aztec rebellion, Francisco Pizarro’s battle against the natives of Colombia, Lewis and Clark's expedition, David Livingstone’s attack by lions in Africa, Marco Polo’s travels in China, and Samuel de Champlain’s fight against the Iroquois. Feature boxes and maps add additional details and help readers better understand the explorer's journey and the time period in which the expedition took place.

Ten of the Best Adventures in Space

Readers will be amazed by ten exciting stories of miraculous survival and tragic events in the history of space exploration. Stories include: the near-fatal journey of Uri Gagarin, Neil Armstrong’s first step on the moon, the breakdown of Apollo 13, the Russian Salyut 1 space station, the space shuttle Challenger disaster, fire on board the Mir space station, and the two successful flights of SpaceShipOne. Feature boxes add additional details and help readers better understand the dangers faced by the crew on these famous missions.

Ten of the Best Adventures on the Seas

Ten exciting stories feature dangerous voyages of famous explorers traveling on the high seas in search of fame and fortune. Feature boxes and maps add additional details and help readers better understand the explorers’ journey and the time period in which the expedition took place. 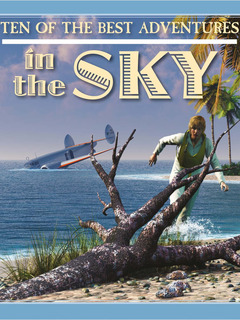 Ten of the Best Adventures in the Sky

Ten exciting stories tell of the success and failures of many famous inventors and pilots in the quest for flight. Stories include: the first hot-air balloon to carry people, the Wright brothers and the first airplane, Charles Lindbergh’s nonstop flight from New York City to Paris, Amelia Earhart’s attempt at a round-the-world flight, breaking the sound barrier, and Felix Baumgartner’s skydive from space. Feature boxes add additional details and simple maps help readers better understand the flight paths.

Ten of the Best Adventures in the Jungle

Ten exciting stories feature famous explorers and their dangerous jungle adventures. Stories include: Gonzalo Pizarro’s search for the city of El Dorado, Mary Kingsley's fall into a pit of stakes, Percy Fawcett and the lost city of Z, Henry Walter Bates’ adventure in the Amazon, and Captain Barth Blake's search for Inca gold in the Amazon. Simple maps and feature boxes add additional details and help readers better understand the time period in which the explorations took place.

From exploring 1,000 miles of the Arctic tundra on dogsled to skiing across Antarctica, Ann Bancroft is no stranger to adventure! Her travels have taken her all around the world, making the outdoors her classroom. Discover the life of this explorer through engaging text and photos in this low-level title. Special features include a profile, career timeline, and inspirational quotes.

Catch of the Day

Ethan helps rescue a friend from the rapids.

"Michael Spreckel! Where Have You Been?"

Michael went into a cave to get some moss and stalactite drippings for his jungle journal . . . and that was just the beginning!

When she was seven years old, Geraldine (Jerrie) Mock took her first airplane ride. She decided then and there to be a pilot. Growing up, she was inspired by radio broadcasts detailing the travels of aviatrix Amelia Earhart. Joan Merriam was 15 when she took her first plane ride in 1952. She got her pilot's license before she could even drive a car. And like Jerrie, Joan too was inspired by Earhart and wanted to circle the globe, following Earhart's exact route. Years later, when both women begin to plan their dream flights, they are completely unaware of each other, and coincidentally pick the same time to depart. But when the media gets word of their plans, the stage is set for the race of a lifetime. This picture book retells the extraordinary story of the 1964 air race between Americans Geraldine Mock and Joan Merriam Smith, the first two women to fly around the world.

Get the facts about extreme sports--bungee jumping, paragliding, dirt bike racing, and more--before reading The Climb, an exciting story about having to participate in extreme sports to survive.

To a Foreign Shore

When Kanunu is captured and taken aboard a pirate ship, he finds adventures on new shores.

Buzz and his friend Miranda are thrilled to meet the stars of their favorite television program "Star Searchers," but soon learn that their heroes are just ordinary people as they join forces with the actors to battle aliens from the planet Xycon.

When Grady's family moves to a deserted island in the Florida Keys, the family finds more activity than expected as a hurricane comes their way.

Two groups of Englishmen are shipwrecked and begin a difficult journey to St. Augustine.

While on a field trip to study native plants, Kenneth and Aleesa are transported to Hawaii in the 1890s, where they see first-hand the final days of the reign of Queen Liliuokalani and learn about native rights.

Kenneth and Aleesa, working on an extra credit project about Socrates, suddenly find themselves in ancient Athens, where they meet the famous philosopher and try to save his life.