Winston Churchill was a skilled speaker who found ways to calm people's fears. This biographical book gives details about the life of Winston Churchill and the impact he made during World War II as part of the Allied Forces who fought against Adolph Hitler and the Nazis. Featuring stunning photos and images, fascinating sidebars, supportive text, and helpful glossary, index, and table of contents, this book will have readers fascinated and engaged from cover to cover.

Born in 100 B.C., Caesar grew up to be a talented leader who had a very successful military career. This enlightening and appealing biography illustrates to readers the powerful role that Julius Caesar played in Rome, along with details about the Rome History Republic, Roman social class, and the rise of the Roman Empire. The bright photos and maps and captivating facts and sidebars allow readers to be engaged and entertained simultaneously. The helpful glossary and index work in conjunction with the supportive, easy-to-read text to aid in better understanding of the content. 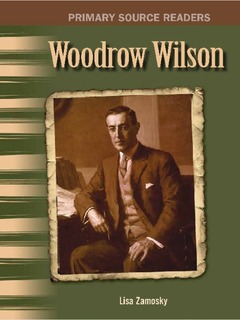 Woodrow Wilson was a lawyer, an educator, and a politician. This biography tells all about his inspiring life as President of the United States. Through fascinating facts and engaging sidebars, children will learn that Wilson was an advocate for reform in education and government. Readers will explore some of Wilson's most prominent ideas and goals--including the Federal Reserve System, the League of Nations, and the New Freedom program--through appealing images, a colorful scrapbook layout, and helpful glossary and index.

During the Cold War, communism was seen as a viable threat to the world. This fascinating title will introduce children to the leaders of the Cold War such as Nikita Khrushchev, John F. Kennedy, Vladimir Lenin, Joseph Stalin, and Mikhail Gorbachev as well as the ideas and systems each of them believed in and upheld including communism, democracy, and capitalism. Through vivid images, intriguing facts and sidebars, a helpful glossary and index, and accommodating table of contents, readers will be interested and engaged from cover to cover!

Unravel the conflicting differences between these two founding fathers in the book Hamilton vs. Jefferson! This informational text compares and contrasts the lives, ideologies, and contributions of two of America's most influential founding fathers. This nonfiction reader examines their political rivalry and includes letters, photographs, newspaper articles, maps, and other primary sources that will captivate students while building their critical-literacy skills. This book includes: text features such as captions, bold print, a glossary, and an index increase understanding and build academic vocabulary; a “Your Turn!” activity challenges students to connect to a primary source through a writing activity.

Eleanor Roosevelt lived during an exciting time. This inspiring biography highlights Eleanor's incredible life as First Lady of the United States and how she worked to help give her husband, Franklin D. Roosevelt, advice during his presidency. The supportive text, intriguing facts, and touching photos show how she stood up for the weak and was an equal rights advocate. An accommodating glossary, table of contents, and index are provided to give readers an experience that is both enjoyable and engaging.

Hatshepsut was a young woman who became the first female pharaoh of Egypt and ruled for about 20 years! Readers will learn about Hatshepsut's amazing life as she made her way from regent to queen of Egypt in this captivating biography. The stunning images, intriguing facts, supportive text, glossary and index combine to create an enlightening and entertaining reading experience as children learn about kings, queens, pharoahs, and other aspects of Egyptian history.