The Palace of Knossos

Thousands of years ago, royals gathered in the luxurious Palace of Knossos. Today, the palace is in ruins. Though bright frescoes still decorate its walls, the walls themselves are crumbling. What happened here? This high-interest title explores just that! Engaging text, colorful photos, maps, graphs, and other features combine to tell the gripping story of the Palace of Knossos and its fall to ruin.

A group of tourists crowds into a dusty room with brightly painted walls. They have entered King Tut’s tomb! Priceless artifacts once filled every chamber of the tomb. Now they are in museums across the world, carrying on King Tut’s legacy thousands of years after his death! This high-interest title uses vivid photographs, timelines, graphs, and profiles of important discoveries to introduce readers to the fascinating world of this ancient Egyptian ruler. 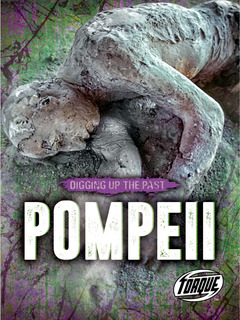 Signs of life are everywhere in the Roman city of Pompeii. Graffiti decorates the walls. Ancient homes and restaurants still stand. Colorful frescoes and mosaics are still visible. But this city is a graveyard. More than 2,000 years ago, Mount Vesuvius rained fire and ash onto the city. Many who died there were perfectly preserved in ash, only to be discovered centuries later. This high-interest title uses maps, graphs, and profiles of important discoveries to explore the fascinating history of the doomed city of Pompeii.

Most people know the Titanic from television or movies. But there are a few things that Hollywood left out. This high-interest title takes readers on a journey across the ocean to explore the Titanic’s history, from when it was built to its resting place on the ocean floor. Maps, graphs, profiles of recent discoveries, and other features provide a look into what went wrong on this ill-fated ship.

China’s famous terra-cotta army has at least 8,000 soldiers! More than 2,000 years ago, this army was created to protect the tomb of the ancient Chinese emperor Qin Shihuang. Today, the army has immense value to archaeologists and historians around the world! This high-interest text uses maps, graphs, profiles of recent discoveries, and other features to introduce readers to the army’s thrilling history.

The Cave of Altamira

The oldest paintings in the Cave of Altamira are more than 20,000 years old! Created by early humans, the paintings now give scientists a glimpse into the lives of people long ago. This high-interest title dives into the story of the cave, from its early inhabitants to its modern visitors. Maps, graphs, and profiles of new discoveries help paint a clear picture of the ancient cave and its many secrets.

Describes how the Stegosaurus was discovered, how paleontologists study its bones, and what the fossil evidence tells us about this plant-eating dinosaur with plates.