In the spring of 1954, when her father announces that the family has a chance to immigrate to Canada, Theresa's life changes forever. She and her family are wartime refugees from Yugoslavia; so it shouldn't be hard to leave Austria. But the weathered barracks of Lager Lichtenstein are the only home she knows, and they are filled with family and friends she doesn't want to leave behind. As she says her good-byes, Theresa's friend Martin gives her two gifts: a package of postcards and a stone he calls the Gnome's Eye, which he says will "protect her from all things evil, living or dead." Theresa is convinced the stone has no power, but she still keeps it close as they travel on the crowded immigrant ship and when they settle into a rooming house on Kensington Avenue in Toronto. At first Theresa is afraid of everything: the other tenants in the rooming house, the rat that lives in the kitchen, learning a new language. But as time goes by, Theresa's need for the Gnome's Eye fades, until she is finally able to give it to someone who needs it more than she does.

Justin is fascinated with the aged guard dog at the corner store. He names it Smokey and sneaks the dog treats. Smokey belongs to a company that supplies working dogs to local businesses. Justin is thrilled to get a job working for Smokey's company, until he learns about the mistreatment of the animals. When Justin can't shake his suspicion that someone in the company is involved in a rash of thefts, he tries to quit. But Justin knows too much, and his boss won't let him go.

As much as life has irrevocably changed since the death of his father, much has stayed the same for Cam. He's always had a great deal of responsibility around the house, but the burden is heavier now in combination with the load of grief he's been carrying. After the man who was driving the truck that killed his father turns up at the end of the driveway, Cam feels pressure to keep his family safe as well. He starts to see the man everywhere: at his work, in stores, at his sister's school. Cam needs to know what the man wants from his family, and he starts following his father's killer in search of answers. 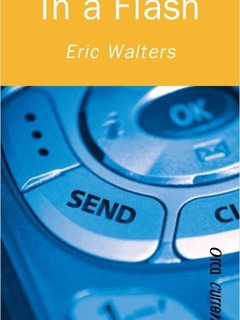