To a Foreign Shore

When Kanunu is captured and taken aboard a pirate ship, he finds adventures on new shores.

Westward Journeys contains three stories focusing on the American westward expansion, including the Oregon Trail and the Oklahoma Land Run. In Minnow and Rose, Rose and her family are traveling with a wagon train heading west on the Oregon Trail. When she encounters Minnow, a young native girl, their meeting has life-changing results for both cultures. The Oklahoma Land Run is the topic in Pappy's Handkerchief. When Moses and his family hear of free farmland out in Oklahoma, they head west to fulfill a lifelong dream of owning their own land. After a difficult wagon trip, they arrive at the staging point for the Oklahoma Land Run. In A Book for Black-Eyed Susan, Cora's family is faced with tragedy during their journey on the Oregon Trail. When Cora learns she is to be separated from her baby sister, she creates a memento of their journey together. 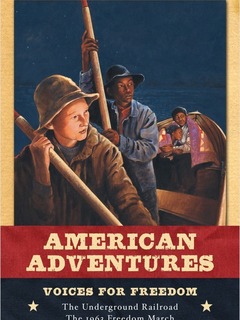 Voices for Freedom contains three stories focusing on the Underground Railroad and the 1963 Freedom March on Washington. Stories are Friend on Freedom River, Riding to Washington, and The Listeners.In Friend on Freedom River, written by Gloria Whelan, runaway slaves ask Louis to ferry them across the Detroit River to freedom in Canada. Hes not sure what to do. If they are caught, it means prison for Louis. Written by Gwenyth Swain, Riding to Washington tells of one girls journey to attend the 1963 Great March on Washington. Janie and her father ride a bus to Washington, D.C. to hear a man named Dr. Martin Luther King Jr. speak. During the trip, Janie sees firsthand the injustices that many others endure. In The Listeners, another offering from Gloria Whelan, each night Ella May and her friends secretly listen outside the windows of their masters house. They listen to learn their fates and those of the other slaves.

It is 1933 and the Great Depression has ravaged the nation. Millions of people are out of work; thousands of families are struggling to keep a roof overhead and food on the table. But Momma still finds ways to count her blessings (lucky stars) from Ruth's new shoes to Poppa's new job. But where Momma sees the 'bright,' Ruth only sees the dark. Her shoes are hand-me-downs from a neighbor and Poppa's new job keeps him away from home for months. And now their town can't afford to keep the school open. Ruth will not be going to fourth grade even though she's one of the brightest students in her class. How can anyone find the good in that? But when Ruth stops thinking of her own problems and focuses on someone else's, she realizes that being a lucky star is the best way to start seeing your own lucky stars.