Adina has always wanted to be a part of the annual fashion show at her school for the arts. Now that she's finally in the ninth grade, she and her friends can audition. She knows their act could be perfect. They've got great music, gorgeous costumes and wicked dance moves. But Willow is being her usual flaky self, and Sandra's getting touchy. Maybe even a bit mean. Luckily, Seth remains steady and reliable. Their biggest competition is the annoyingly perfect Prima Donnas, who are doing everything they can to undermine Adina and her friends. Adina is used to working hard at everything she does, including her violin, art, drama and singing classes. But her friends are getting sick of her ordering them around. They just don't get what a huge deal this is. When one of the Prima Donnas gets injured during their audition, minutes after Sandra storms off in a huff, the two groups realize that in order to succeed, they may have to work together.

Hailey McEwan has many interests - soccer, field hockey, animation. She'd probably never have started singing if her best friend, Crissy, hadn't persuaded her to take singing lessons and join her choir. No one had any idea that Hailey would be such a natural, least of all Hailey herself. A shared love of music from pop to opera has been a big part of the girls' friendship, but when the two face off in a competition for a role in a production of The Marriage of Figaro, their closeness turns into a bitter rivalry. Hailey will have to make a tough decision. Is opera as important to her as it is to Crissy? And is landing a role worth losing her best friend? 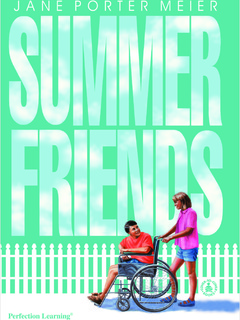 Cassie, who is spending the summer with her aunt while her parents go through a divorce, becomes friends with Joey, a boy in a wheelchair who lives nearby with his grandmother.

On a visit to a seaside town in Australia, fifteen-year-old Sam meets Annabel, who works at the local museum. Annabel's interest in history is infectious, and Sam soon finds himself eager to hunt for the remains of a boat called the Mahogany Ship—a shipwreck sought after by many. When a storm creates an erosion hole that exposes a structure, Sam and Annabel are convinced it's the fabled ship. Soon all of the museum staff are at the erosion site to check it out. But the same storm also destroys the museum's power; someone knows the alarms aren't working and steals the museum's most treasured artifact, a large porcelain peacock worth $4 million. As Sam and Annabel search for the thief, they realize there may be a link between the fabled shipwreck and the recent theft.

Following the demise of his first band, Ace has started a duo called Two with Lisa, a girl he has a huge crush on. As Ace and Lisa get serious about their music, Denny, Ace's hapless friend, tries to help out by filming their every move so that he can create the ultimate music video. As a joke, Denny puts together a Two video capturing all of the embarrassing moments—moments that Lisa in particular doesn't want shared. Somehow, the video gets posted on YouTube. Lisa and Ace find themselves starring in the latest comedic viral video. Lisa is humiliated and refuses to talk to Ace—until their fame turns out to have positive results.

It really seems like Dani's dad has gone around the bend. Ever since Dani's mother died of cancer, all her dad does is stand around on street corners with his crazy signs, proclaiming that processed foods mean the end of the world. The Food Freak, as he is known, has already scared away all of Dani's friends at her old school. But it's a new year, and Dani is at a new school in a different part of town. Maybe things will be better now. Dani just needs to keep her head down and avoid making any friends. That way, nobody will find out about her dad and his insane protests. The plan seems to be working fine until one day Dani meets a boy who helps her see things in a different light.