A beast of a man from Ireland, Sheamus uses his size and strength to punish his opponents. Although his career is young, he has already made an impact in wrestling. He has won many belts, including the WWE Championship. Learn how Sheamus incorporates his heritage into his showmanship and signature moves. He makes his home country proud with every pin. 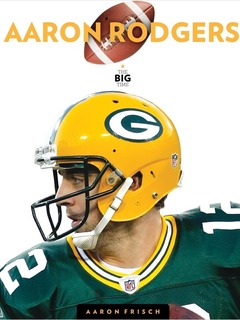 An elementary introduction to the life, work, and popularity of Aaron Rodgers, a professional football star who quarterbacked the Green Bay Packers to victory in Super Bowl XLV.

An elementary introduction to the life, work, and popularity of Adrian Peterson, a professional football star who became the all-time leading rusher for the Minnesota Vikings.

An elementary introduction to the life, work, and popularity of Albert Pujols, a professional baseball star who played first base and helped the St. Louis Cardinals win two World Series.

An elementary introduction to the life, work, and popularity of LeBron James, a professional basketball star for the Cleveland Cavaliers and Miami Heat who won two Most Valuable Player awards.

Kevin Durant is a kid at heart when he's not busy being a basketball star. He is a 6-foot-9 forward with guard skills and a drive to be the best in whatever he does. That includes acting-Durrant starred in the movie Thunderstruck. He made such an impression in his one year at the University of Texas that he became the NBA's no. 2 draft pick. Before he was 25 years old, Durrant was a three-time NBA scoring champion and an Olympic gold medalist. He rates as one of the NBA's most popular players-you can catch him on Twitter-and goes out of his way to help those in need. Durrant is a superstar in every sense of the word.

Washington Redskins quarterback Robert Griffin III, also known as "RG3," is not Superman, although he sometimes wears Superman socks. He has become one of the nation's most popular athletes. He set Texas state track records in high school when he wasn't dominating in football. Griffin won the Heisman Trophy while at Baylor University. He became the NFL's no. 2 overall draft pick by Washington, then won NFL offensive rookie of the year honors. In his spare time, Griffin does things for those less fortunate. He is a superstar in every sense of the word.