Search for the Northwest Passage

An obsession for hundreds of years, the search for the fabled Northwest Passage from the Atlantic Ocean to the Pacific is a tale of ambition, fear, folktales, courage, and controversy. This engaging title reveals the motivations of the many countries and explorers who played a part in the almost 500-year search for a commercial sea route to India across the arctic. Primary and secondary source materials, such as oral histories of the Indigenous people and recorded accounts, are examined, as well as fictional accounts from popular culture of the many failed expeditions. Readers will gain an understanding of how important this quest was, as well as how it remains relevant today.

“Victory or Death” — the famous and stirring words of William Barrett Travis were written in a letter from the Alamo to the people of Texas in February 1836. This and other brash and brave letters, first-hand accounts, and documents are skilfully deconstructed in this detailed examination of The Battle of the Alamo, a last stand that proved to be a turning point in Texas’ War of Independence from Mexico. Readers will learn about the events leading up to and after the battle, be able to separate fact from myth, and better understand the perspectives of both the Texans and Mexicans. 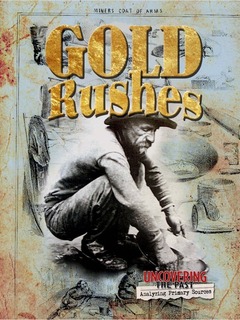 This comprehensive title is a thought-provoking examination of how early gold rushes shaped settlement and industry in North America. Using material from the 1848 California Gold Rush, the 1896 Klondike Gold Rush, and other rushes in Georgia, Montana, and British Columbia, primary and secondary sources about these rushes are examined with respect to race and ethnicity, the displacement of Indigenous peoples, and different perspectives on law and order in the emerging West. Readers will be encouraged to think critically about labor and environmental practices, and the relationships between settlers and Indigenous people both in the past and today.

McCarthyism and the Red Scare

Politically and socially, the decade from 1947 to 1956 marked an era of repression and fear. McCarthyism was a practice named for the blustery U.S. Senator Joseph McCarthy. Known for his reckless and unsubstantiated accusations, he led a campaign to root out real and imagined “subversives” in American society. Packed with enlightening primary and secondary source material, McCarthyism and the Red Scare examines topical issues to help readers think critically about such concepts as freedom, Constitutional rights, blacklisting, and personal and state ideology.

Nuclear Weapons and the Arms Race

This timely title discusses the creation of the atom bomb and the post-World War II nuclear arms race that shaped the consciousness of generations. Primary and secondary source materials such as contemporary photos, speeches, letters, and newspaper accounts are examined, offering readers insight into a world reeling from years of conflict, and the competing political and social ideologies of the former Soviet Union and the United States and its allies. Topics covered include the Manhattan Project, the dropping of the first atomic bombs, and the escalation of the arms race, as well as nuclear treaties and the relevance to today’s nuclear threats.

Using speeches, photos, and paintings of the time, as well as material that addresses historical context, The Civil War guides readers in critically examining primary and secondary source materials. Discussions include how emerging technologies such as photography and the telegraph affected the messages being conveyed, and how ideologies of the era shaped what was seen, as well as whose voices were heard—and whose were not. Readers will gain an understanding of the sad and brutal aspects of a war whose echo continues to have an impact even today.

This interesting book examines the events and people who were involved in the War of 1812 between the United States and what would later become Canada. Unusal for a war, the conflict ended with friendly relations established and no major loss of territory for either country. However, an examination of primary and secondary source materials reveals the War of 1812 is remembered differently in each country, as well as by the Indigenous peoples whose territory and dreams of an independent nation east of the Mississippi River vanished.