Colin obtient un emploi de nettoyeur de graffitis dans un beau quartier. Il craint d'être la cible d'un gang, mais ne s'attend pas être à soupçonné de complicité dans une série de cambriolages. Colin n'a rien fait de mal, mais sa présence sur les lieux de divers crimes le rend suspect aux yeux des policiers. Pour prouver son innocence, il devra résoudre lui-même l'énigme des cambriolages. When Colin accepts the job to clean up the graffiti in an upscale neighborhood he worries that he might be targeted by gangs. But he didn't expect to become a suspect in a series of robberies. Every time he is sent to clean up graffiti, the police are nearby investigating a crime. Colin knows he's done nothing wrong, but even he acknowledges his presence at the crime scenes looks suspicious. The only way he can clear his name is to figure what is really going on. 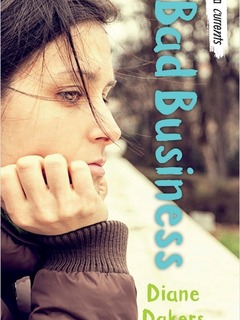 Lindy has been working hard cleaning and doing odd jobs around the neighborhood to earn money for a trip to the Arctic. When Mrs. Naulty, an elderly client, mistakenly pays her a huge amount of money, Lindy keeps it to pay the early-bird rate for her trip. It’s only when a schoolmate learns what she did and starts blackmailing her that Lindy starts to suffer for her actions.

Max knows his mom can't afford to send him to summer camp. But he really, really wants to go. He needs a break from looking after his autistic brother, Duncan. And from his mom's new boyfriend. He is surprised when his mom says that he can go after all. But there's a catch. There are spots available at the camp for families with special needs. A grant would cover Duncan's fees, and Max could attend at no charge. If he goes as Duncan's escort. This is the second story featuring Max and Duncan after Maxed Out.

Rise of the Zombie Scarecrows

Dylan is back, and this time he is making a movie, The Rise of the Zombie Scarecrows, with his best friend, Cory, and his girlfriend, Monica. The film is for school credit, and their plan is to film on Halloween. Everything is falling into place until Dylan and Monica encounter a zombie scarecrow that causes Mr. Dalton, a friend of Dylan’s grandmother, to have a heart attack. Dylan and Monica learn that a couple of zombie scarecrows are pranking a local neighborhood. The police shut down Dylan’s project until the pranksters are caught. But Dylan is determined to see his film through to completion, no matter what the cost.

Charlotte Summers is sure that summer camp is going to be a disaster. And she’s right. But it’s not as disastrous for her as it is for her counselor, Abby. Abby has no control over the girls in her charge. The control is held by the cabin’s mean girl. Charlotte realizes that she could tip the balance of power and unseat the bully, but does she have the courage to go for it?

Sixteen-year-old Kat and her mom haven't seen much of each other since Kat's father died last year. Her mom has taken over the family trucking business and has been away a lot. She promised that Kat could join her on her next run, a journey across the frozen Manitoba lake known as the "winter road." But at the last minute she changes her mind. Kat, who has recently been diagnosed with diabetes, stows away in the back of the semi instead. By the time her mother discovers her, it's too late to turn back.