A level 2 Amicus Reader that discusses turn-of-the-century children’s clothing and how what they wore in the early 1900s is different from what children wear today. Includes “What’s Different?” photo quiz.

A level 2 Amicus Reader that discusses turn-of-the-century American schools and how they are different from the early 1900s to today. Includes “What’s Different?” photo quiz.

Where can one find the world's largest mounted African elephant? Or the world's largest blue diamond? Why, at the world's largest museum complex and research organization, of course! In S is for Smithsonian readers can take an armchair tour of the incredible exhibitions and collections found in the Smithsonian Museum. When it opened in 1855, no one could have imagined that the Smithsonian Museum would grow to include 19 museums, nine research centers, or over 130 million objects, artworks, and specimens collected from all over the world. With over 25 million visitors a year, the Smithsonian truly is the world's largest museum! See the airplane Amelia Earhart flew on her solo Atlantic flight. Admire diamond earrings that once belonged to Marie Antoinette. From A-Z, S is for Smithsonian explores the amazing objects and memorable displays that are part of this remarkable museum. Marie and Roland Smith have collaborated on several alphabet titles, including B is for Beaver: An Oregon Alphabet and Z is for Zookeeper: A Zoo Alphabet. They live on a small farm south of Portland. The author of many books for children, Roland has also penned Sleeping Bear Press's middle-grade series, I, Q. Gijsbert van Frankenhuyzen has illustrated more than 20 books with Sleeping Bear Press, including the bestselling The Legend of Sleeping Bear; The Edmund Fitzgerald: Song of the Bell; and most recently, Itsy Bitsy &amp; Teeny Weeny. He and his wife, Robbyn, live in Bath, Michigan, on their 40-acre farm and wildlife refuge. 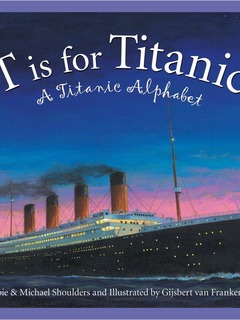 T is for Titanic: A Titanic Alphabet

In T is for Titanic, husband-and-wife writing team Michael and Debbie Shoulders sift through the stories, documents, and artifacts surronding the famous ship, giving a you-are-there view to one of the greatest disaster stories.

Philadelphia 1777 is no place for the faint of heart. The rumble of war with the British grows louder each day, and spies for and against the Patriots are everywhere. No one is above suspicion. Still, everyday life must go on and young Maddy Rose must help her mother, especially since her father's death at the Battle of Princeton and now with her beloved brother Jonathan off with Washington's army. But when childhood games become life-and-death actions, Maddy Rose is drawn ever deeper into events that will explode beyond her imagining. As young America stands on the very brink of its fight for freedom, it becomes clear that even the smallest of citizens can play the largest of parts, and that the role of a patriot has nothing to do with age and everything to do with heart. In The Scarlet Stockings Spy, Trinka Hakes Noble melds a suspenseful tale of devotion, sacrifice, and patriotism with the stark realities of our country's birth. Noted picture book author and illustrator Trinka Hakes Noble has pursued the study of children's book writing and illustrating in New York City at Parsons School of Design, the New School University, Caldecott medalist Uri Shulevitz's Greenwich Village Workshop, and New York University. She has authored and illustrated numerous books including the popular Jimmy's Boa series, which has been translated into six languages. Trinka lives in Berrnardsville, New Jersey. The Scarlet Stockings Spy is her first book with Sleeping Bear Press. Because Robert Papp's childhood drawings of his favorite superheros were such a pleasure, it was only natural that he would wind up an illustrator. Nowadays, his award-winning artwork appears on book covers and in magazines instead of on the refrigerator. He has produced hundreds of cover illustrations for major publishers across the United States. Robert lives in historic Bucks County, Pennsylvania.