The California condor is the largest bird in North America. Scientists have found condor fossils that are nearly 100,000 years old. As more people settled in the American west, however, condors lost much of their habitat to human development. By 1982, fewer than 25 California condors lived in the wild. Read this book to find out more about California condors, how they came close to extinction, and what people are doing do help make sure condors stay on the road to recovery.

The bald eagle is known to people around the world as a symbol of the United States. In the early 1800s, as many as 100,000 bald eagles lived in the United States. By the 1960s, the familiar bird of prey was nearly extinct. What happened? Read this book to find out how human activity brought the handsome eagle close to extinction. Discover how human efforts helped it fight back and once again become a familiar sight in North American skies. 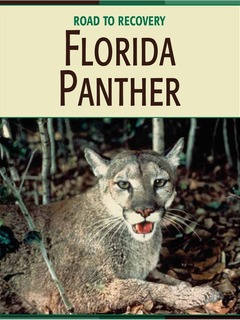 The Florida panther once roamed as far west as Louisiana and as far north as Tennessee. Today, these cats are found in just four counties in southern Florida. How did the Florida panther become one of the most endangered animals in the world? Read this book to find out how hunting and other human activities brought the Florida panther to the brink of extinction. Learn what is being done to help it get on the road to recovery.

The grizzly bear once roamed much of western North America. In the early 1800s, as many as 50,000 grizzly bears lived in the West. As settlers pushed westward, the bears lost much of their habitat. Fewer than 1,000 grizzlies remained in the lower 48 U.S. states when the bear was listed as endangered. Read this book to learn how grizzly bears came close to extinction and find out what is being done to increase their numbers and insure their survival.

The small golden lion tamarin is known for its brownish-red mane, long tail, and territorial nature. Readers will learn about these creatures and how destruction of their coastal forest habitat almost led to their extinction. Find out how zoos and conservationists have collaborated to save the golden lion tamarin.

Many people are afraid of bats, but like every other living thing they play in important role in nature. Readers will learn about cave dwelling gray bats, how they became endangered, and how government leaders and scientists have teamed up to save these furry, flying creatures.

At one time, the howling of gray wolves was a common sound throughout North America. Readers will learn more about these pack animals and what brought them to the edge of extinction. They will also find out more about the steps that have been taken to reintroduce gray wolves to the territories where they once roamed freely.