Lions and elephants and rhinos--oh my! Take a walk through the African savannah with this these brilliantly photographed animals. Used as a jumpstart for interaction, Discover Series Picture Books are a great way to introduce African animals, their sounds and colors to kids.

Do you have a rock collection? Discover rocks, minerals and shiny stones in this book of gems. Each page features one gemstone or mineral and a simple title beneath. Used as a jump start for interaction, Discover Series Picture Books are a great way to introduce new images, words and concepts to kids.

Who needs an oasis when you have the desert? Explore the beauty of desert plants, animals and vistas. This Discover Series book features 24 full-color images with simple titles beneath. Early readers will love the brightly colored plants and animals and older children will learn about one of the earth's most interesting landscapes. Used as a jump start for interaction, Discover Series Picture Books are a great way to introduce new images, words and concepts to kids.

E is for Eiffel Tower: A France Alphabet

From its achievements in architecture (Chartres Cathedral), science (Louis Pasteur), and literature (Marcel Proust), the country of France has had a profound impact on the world. E is for Eiffel Tower: A France Alphabet explores its venerable history and cultural heritage. Sumptuous artwork magnifies each letter topic's poem and expository text. Artists and critics tried to stifle The daring design of Gustave Eiffel. Yet a hundred years later, still it stands A symbol of France to other lands. Young readers can experience the treasures of the Louvre Museum, play hide-and-seek in the gardens of Versailles Palace, or get a bird's-eye view of Paris from the Eiffel Tower. The achievements of Claude Monet and Victor Hugo come to life alongside stunning monuments, breathtaking scenery, and history-in-the-making moments. This is Helen Wilbur's fourth book with Sleeping Bear. Helen also authored Lily's Victory Garden; M is for Meow: A Cat Alphabet; and Z is for Zeus: A Greek Mythology Alphabet. She lives in New York City. Yan Nascimbene's work includes over 40 books. Among his prestigious awards are the Society of Illustrators' Silver Medal and the Bologna International Book Fair Graphic Award. His book, Yuki and the One Thousand Carriers, received the Society of Illustrators' Gold Medal. Yan lives in France.

B is for Bagpipes: A Scotland Alphabet

What country is made up of 95 islands, invented the game of golf, and raised a warrior worthy of the name "Braveheart"? Welcome to Scotland! In B is for Bagpipes: A Scotland Alphabet, Scottish native Eve Begley Kiehm gives an A-Z tour of the country that may be small in size but a giant in history and rich in tradition. Kick up your heels at a Highland dance, visit the statue of Greyfriar's Bobby as he stands guard near his master's grave, and finally dig into a dish of haggis with a side helping of "tatties and neeps." From the splendors of capital city Edinburgh to the stories of Robert Louis Stevenson to the gloomy waters of Loch Ness and its lonely "Nessie," the treasures of Scotland are revealed. Colorful artwork captures the proud spirit of its landscape and culture.Eve Begley Kiehm was born in Bridge of Allan, Scotland. She has a master's degree in Scottish History and Literature from Glasgow University and an early childhood education certification from the University of Toronto. Her books about Scotland include a YA historical adventure novel. Eve lives in the San Diego area. Alexa Rutherford lives in Edinburgh, Scotland. She has illustrated many books for UK publishers and a handful of US publishers, as well as US children's magazines.

T is for Taj Mahal: An India Alphabet

From the quiet grandeur of the Himalaya Mountains to the urban city of Calcutta, T is for Taj Mahal: An India Alphabet showcases India's exotic treasures. Visit the haunting Taj Mahal, a tribute from an emperor to his dead wife. Traverse the bustling streets of Mumbai, the second most populated city in the world. Sample a traditional meal fragrant with garam masala spices, or attend a cricket match where some games have lasted up to five days! Varsha Bajaj was born in Mumbai, India. Her book, How Many Kisses Do You Want Tonight?, was named to the 2005 Texas Library Association 2X2 Reading List. Varsha lives in Houston, Texas. Robert Crawford's paintings have appeared on the cover of major magazines such as The Atlantic and U.S. News and World Report, as well as books. He also illustrated Sleeping Bear Press's The Legend of the Old Man of the Mountain. Robert lives in Woodbury, Connecticut. 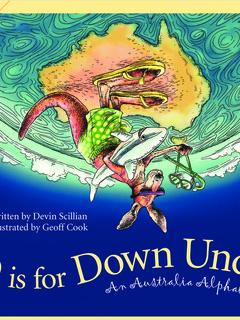 D is for Down Under: An Australia Alphabet

What country holds the title as the world's smallest continent and yet the world's largest island? I stands for island, but one that's not too small. Our island is enormous. Just try to see it all! There's no place else quite like it; that is clearly true. Australia is a continent, but it's an island, too. Originally founded as a penal colony, Australia has long been known for its contrasts (think: wild outback and sophisticated Sydney Opera House). Accompanied by vibrant colorful artwork, D is for Down Under: An Australia Alphabet captures the spirit of this proud country and its many treasures, natural and man-made. Visit spectacular Sydney Harbor, try your hand as a jackaroo working a sheep station, or just sit back and enjoy a Vegemite sandwich. Below the starry night glitter of the Southern Cross constellation, Australia's "down under" wonders shine brightly. Devin Scillian is an award-winning author and Emmy-award-winning broadcast journalist. His books with Sleeping Bear Press include the national bestseller A is for America: An American Alphabet. Devin lives in Michigan and anchors the news for WDIV-TV in Detroit. Geoff Cook has been illustrating for 35 years. His career began as a graphic designer, after graduating from Prahran College in Melbourne. Soon realizing he wanted to be an illustrator, he became a partner in the illustration studio All Australian Graffiti. He lives in Australia.